Related: Number of students being homeschooled in Colorado more than doubles.

And as the number of students at public schools drops, so does the schools’ funding.  Couldn’t happen to a nicer bunch of Commies.

Faced with complaints from parents about the indoctrination of children, an official in Rockwood School District, Missouri, instructed teachers to create two sets of curriculum: a false one to share with parents, and then the real set of curriculum, focused on topics like activism and privilege.

I should point out that the foul “educator” who sent out this loathsome message is, like First Lady Jill Biden, a Doctor in Education (EdD).

And the next time someone tells me that homeschooling is wrong for children, I’m going to punch them in the face.

Apparently some professor in Vermont has caused all sorts of issues by refusing to kowtow to the “racial equity” scam, asking:  “Would you please stop reducing my personhood to a racial category in your teachings?”

Predictably, calls have gone out for him to resign:

A petition calling for the resignation of Kindsvatter has earned over 3,400 signatures. The authors state that Kindsvatter’s statements are “harmful to our campus’ community of color.”

A rival petition — which has garnered over 4,400 signatures — asks that Kindsvatter assume control of all diversity measures at the University of Vermont.

I think the will of the people should be obeyed.

And in an increasingly-rare show of testicular fortitude, our guy has refused to resign.

Professor MacCormack’s book defeated me, not only sapping my will to read further but inducing a state almost of catatonia.  It certainly cured me, at least temporarily, of my obsessional desire to finish any book that I have started.  Her style made  The Critique of Pure Reason  seem as light and witty as  The Importance of Being Earnest.  She appears to think that the English plural of manifesto is manifesti rather than manifestos;  I admit that it conjured up in my mind a new Italian dish, gnocchi manifesti.
Open the book at any page and you will find passages that startle by their polysyllabic meaninglessness combined with the utmost crudity.  By chance, I opened the book to page 144 and my eye fell on the following:

The multiplicity of becoming-cunt as an assemblage reassembles the tensors upon which it expresses force and by which force is expressed upon its various planes and dimensions.

I have known deteriorated schizophrenic patients to speak more sensibly and coherently than this.

No kidding.  Let’s take a look at this paragon of literacy, shall we? 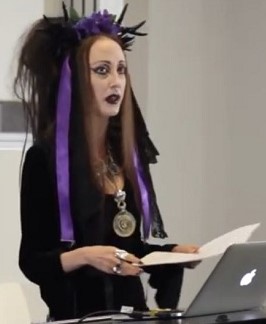 …and not in drag: 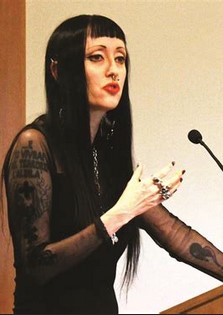 One wonders what John Ruskin (after whom it’s named) would think of this example of its academic excellence.

As Longtime (and, probably, Recent) Readers know full well, intemperate speech is not exactly an unknown event on this here back porch, and I often “permit” (okay, encourage) the same in Comments.  But I’m just a guy with a digital megaphone, little different from the loons one would find at Speakers Corner in Hyde Park, London or the average screamer on a city street.

I am not, however, a college “professor” who does the same in a classroom:

The investigation found that Castro would belittle students who disagreed with his religious beliefs or lack thereof. Students alleged that Castro made his political beliefs known in the classroom by saying things such as he “would cut off [former U.S. Attorney General] Jeff Sessions’ head and play soccer with it,” and that he would “hang [President Donald] Trump by [President-elect Joe] Biden’s entrails” for example.

Castro celebrated the news of Rep. Louie Gohmert (R-Texas) contracting COVID-19 and hoped that President Donald Trump and Vice President Pence would contract the virus too, in addition to calling Trump a “fat klansman.”

That’s his right to say that — Glenn Reynolds once suggested on his private Twatter account that we should run over violent protestors who attacked our cars, and there’s nothing wrong with that, either.  (Actually, there’s a great deal correct about it, but we can discuss that another time.)

The minute, however, you subject your students –essentially, a captive audience — to your unhinged ravings and penalize them for disagreement, you should be shown the door, the window, the wall and finally the street as you are tossed out on your tenured ass.  (Which, amazingly, Texas A&M are doing to him subject to his appeal, which is also his right.)

There is a clear distinction here between freedom of speech and professorial misconduct.  For far too long, students have had to toe the line and simply acquiesce with the antics of such professors even (or especially) when they disagreed with these Marxist loons.  My own kids used to tell me about this when they were still at college.  (I did no such thing, and for some reason none of my professors ever confronted me when I called attention to their silliness.)  So it’s long past time that this conduct was censured — and by the way, as a side issue, tenure should not be treated as a barrier to censure either.

Alvard was reportedly notified of disciplinary sanctions following the results of the investigation into his classroom conduct and behavior. In the memo, Alvard was charged with “creat[ing] a negative learning environment for some students that materially affected their ability to participate and learn” and that Alvard “failed to deliver instruction and class materials in an unbiased and respectful manner.”

What the hell has happened to Texas A&M?

Then we have another academic fuckwit getting his two cents in:

“Republicans, you should not be allowed to speak about being shocked by President Donald Trump or the recent right-wing raid in Washington, D.C., for your words ring hollow,” wrote Jones, who is the chair of the Pan-African Studies department. “You all should be forced to shut the hell up unless whatever you have to say begins with, ‘I’m sorry.’ You should not be allowed to condemn Trump or attempt to distance yourselves from him unless you begin with, ‘I have helped him, and I’m sorry,’” he wrote.

Ummm who exactly is going to force us to shut up, asshole?  You?  The federal government?

Actually, I know who he wants to shut us up:  Big Tech — Google, Apple, Facebook, etc. — and they’re getting down to that with gusto, the Leftist cocksuckers.