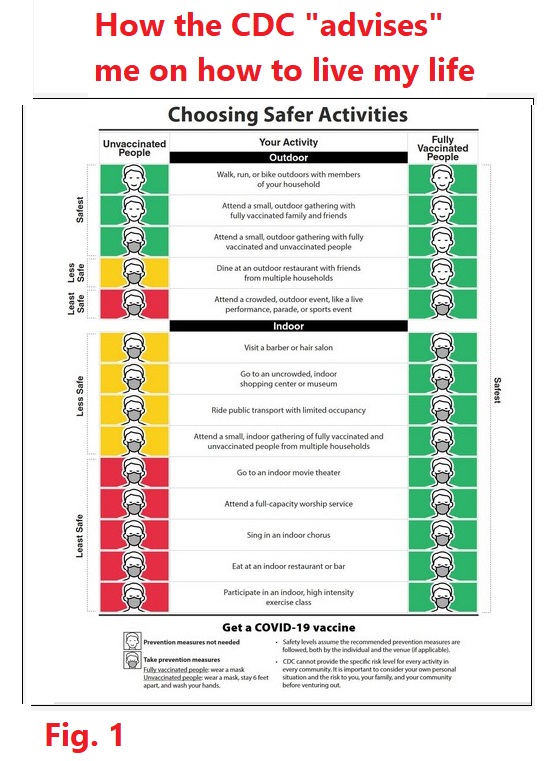 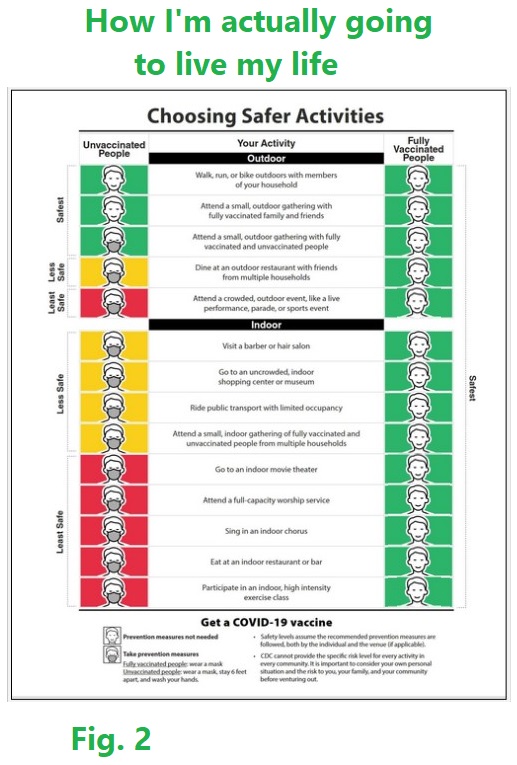 I trust this answers any questions.

Oh, and for Reichsgesundheitsabteilungführer  Fauci, yet again:

Dallas International Guitar Festival (DIGF) is back at Dallas Market Hall April 30-May 2. The world’s largest and oldest guitar show is excited to emerge from their cocoon after a year-long quarantine caused by the pandemic.

Fantastic.  I wasn’t going to be able to go because I would have been at Boomershoot;  but subsequent events made it possible for me to go this year.

Dallas Market Hall will still have a mask mandate in place during the event. Masks, along with social distancing, will be a requirement.

Fuck you.  I’ve been vaccinated, I’m sick of people telling me to do stupid shit when it’s all unwarranted, and I refuse to wear a face condom anymore, anywhere.  Maybe next year, then.  Or not.

“[All this nonsense] will help on-site attendees and exhibitors feel more safe and comfortable attending the Dallas International Guitar Festival this year.”

And fuck their paranoia and need for a security blanket, too.

Looks like the increasingly-irrelevant Covid Supremo is getting desperate:

Fauci:  ‘It’s Still Not OK’ to Eat or Drink Indoors Even if You’re Vaccinated

I used to play golf, a long time ago, and I quite enjoyed it because while I wasn’t that good, at least I was good enough not to make a fool of myself at company golf days, or playing with clients — a competent social golfer, in other words, with some really good shots and not too many abysmal failures.

The problem was that I had to play a lot of golf (at least three rounds a week) to keep that standard up.  And as time went on and I moved into upper management, there was less and less time to play.  Three times a week turned into every other week, then once a month… and my game went to shit.  So eventually I stopped playing, because the most frustrating thing is to know what shot to play, but no longer being able to play it;  and I was just making a damn fool of myself by even trying.

I’ve reached that point with shooting.

People sometimes say that a bad day at the range is still better than a good day at the office, which is total bullshit, of course:  I’ve had days at the range where equipment broke, where I’ve arrived at the range but forgotten my ammo at home — you all know what I’m talking about here.  And I’ve had some days at the office which were pretty spectacular, both from a career perspective and just feeling the satisfaction of having done a really good job that day.

But in my whole life, I’ve only done things until they stopped being fun anymore;  and I’ve reached that point with shooting.  I’ve always been a competent handgun shooter, and a little better than average with a rifle, but I’m no longer either.  My eyes are absolute shit — despite several surgeries, I have advancing glaucoma (which is incurable, and can only be arrested with prescription eyedrops) and even worse, my always-severe astigmatism  seems to be getting worse with advancing age.  Crosshairs in a scope now appear to be two overlapping sets of crosshairs: 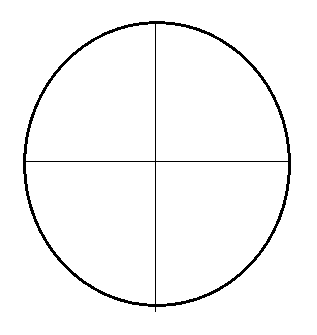 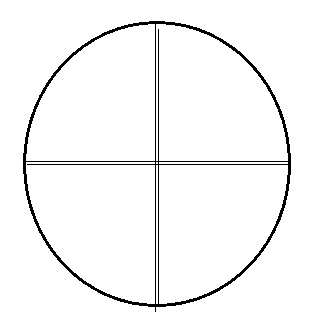 and a red-dot sight looks like a Mastercard symbol: 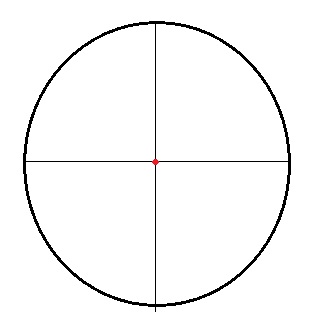 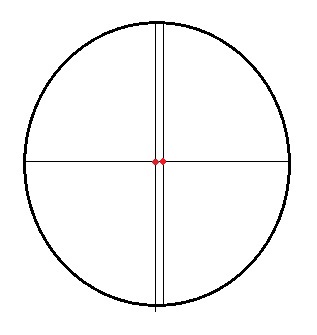 When trying to place a shot into a 1″ target at 100 yards, it’s almost impossible to shoot consistently because sometimes the left-hand image is in focus, and other times the right-hand one seems to be the one to use.

Frankly, after squinting and refocusing for what seems like minutes, I sometimes just pull the trigger to get it over with.  With predictable — i.e. shit — results.

It’s no good using the best equipment either, because no matter how good, the results are going to be terrible because I just can’t shoot for shit anymore.  And I get no joy out of shooting the good stuff anymore either.

I’m not looking forward to this year’s Boomershoot, where the ranges start at 400 yards, and go out to 900.  If I hit one Boomer over two days, it’ll be a miracle.  And that’s no fun at all, especially when I’m not some newbie shooter — not after sixty-odd years of shooting — even though my targets look like one.

And I’ll be trying like hell not to have to drive at night to get up to Idaho, because: 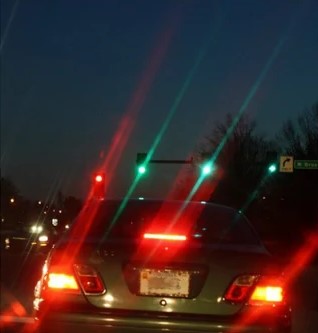 Last Thursday I was at the range, doing some final adjustments to both Boomershoot rifles — the .308 Win CZ 557 Varmint (this year’s ULD raffle prize) and my 6.5×55 Swede 550.  When I finally gave up, checked out and the counter guy asked me if I’d enjoyed the session, I replied, “No.”  Then I added, “I think my shooting from now on is going to be Coke cans at 25 yards.”  And as I said that, I realized that this really is going to be the case.

I’m done with the Gun Thing.  This will be my last Boomershoot, I won’t be hunting deer in Scotland or birds in Devon with Mr. Free Market, and most probably not even sporting clays.  My only shooting will be to keep in training with my self-defense guns, and a little plinking with .22 rifles at large targets (cans, oranges, that kind of thing) at close range.

I will probably be selling most of my guns — details to be announced later — keeping only a very few that I’m comfortable shooting.

It’s just not fun anymore, so shooting is going to go the way of golf.

As Longtime Readers know, I have little time for professional sports right now, as their controlling organizations have succumbed to Wokeness.  Nevertheless, recent events here in Cuidad Tejas have come to my attention, and I need to highlight just one;  but first, a little background is necessary.

The Texas Rangers baseball team sucks.  It’s not quite as bad as the 1920-2002 Chicago Cubs in its depth of suckitude, but it’s never been that far off either.  Opening Day of each season, therefore, has seldom been a gala affair, sometimes approaching a half-full stadium but more often than not, not even close.

Last Monday’s opening game, therefore, did not bode well, especially as it was against the Toronto Blue Jays, in which team Texas interest ranks somewhere around zero.  And not many Canuckis are going to fly all the way down to Dallas for their team, even if it means an escape from their frigid city.  (It may be spring here, but in Toronto spring still has a couple months to go before putting in a timid appearance.)

So:  an empty stadium at The Ballpark In Arlington*?  Ummm, nope: 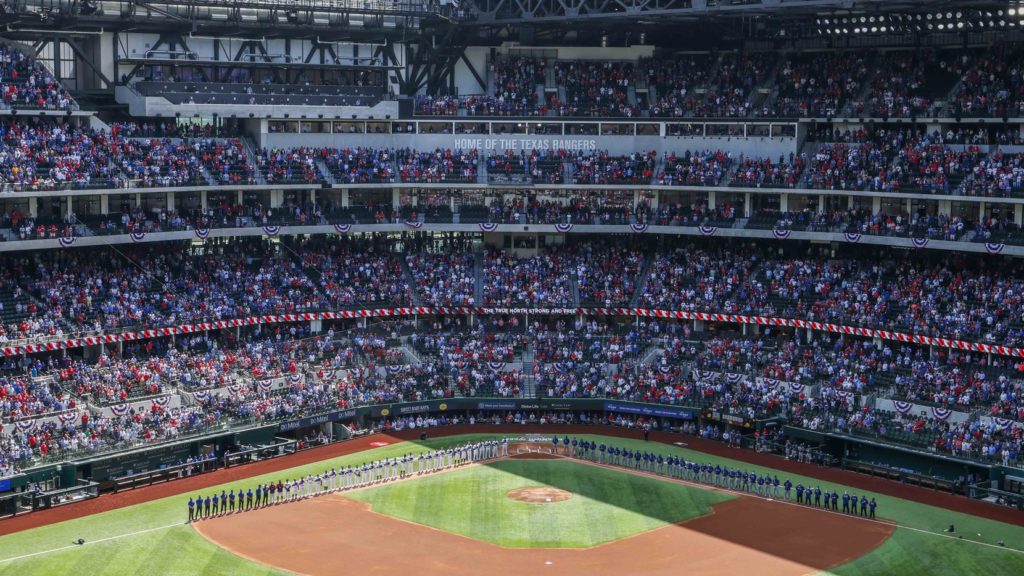 That’s more spectators than I’ve ever seen on Opening Day here.  And yes, there were people wearing masks, just like Dr. Fauci ordered — but a hell of a lot of others weren’t: 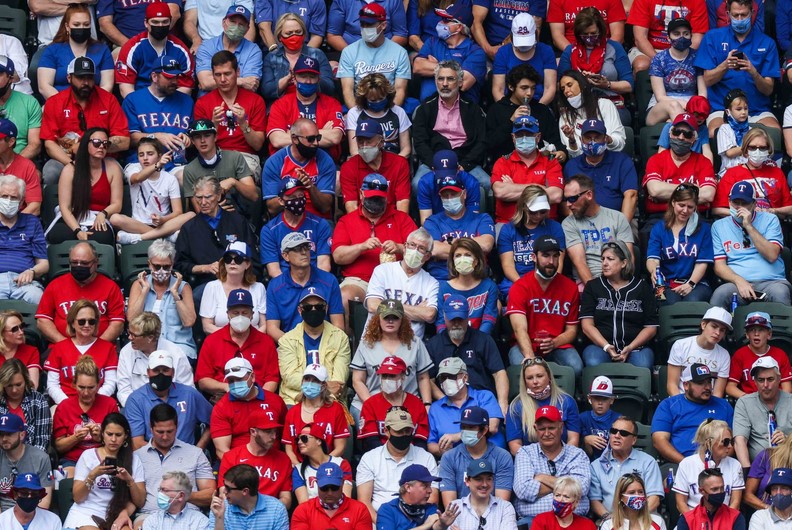 …because wearing a mask in the open air is senseless, even in a stadium packed almost to capacity.

Clearly, the good people of Texas are fed up with all this mask bullshit, and as I noticed a couple weeks back, it’s starting to show itself all over the place.  And yes, despite having 20 million more residents than Gauleiter  Gretchen Whitmer’s Michigan, Texas has far fewer Chinkvirus cases not just on a per capita  basis, but in absolute numbers.

So fuck off, Fauci.

*I know, it’s now Globe Life Field or some bullshit, who cares. 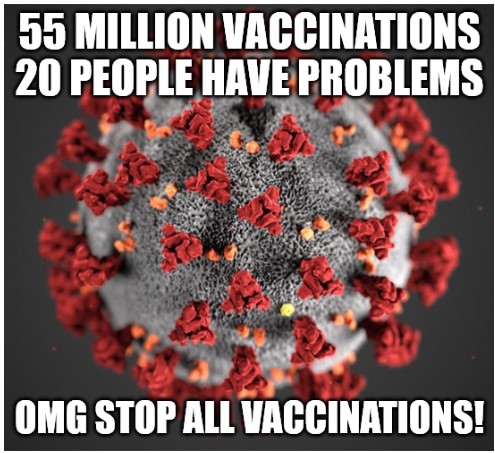 Actually, if you imagine this meme in German (they being the ones behind the suspension), it makes even more sense.