Back in the late 1960s and early 70s, it became apparent that Rhodesia was going to fall and become just the latest African shithole (now known as Zimbabwe).  As a result, there was a veritable flood of White Rhodesians over the Limpopo River into what was still a prosperous South Africa.  With their typical mordant wit, Rhodesians called this exodus “taking the gap”, and abbreviated it into the simpler verb “gapping”.

Of course, this was only a short-term solution, because as one wag of my acquaintance put it:  “Where are you Whities going to go next?  The Atlantic Ocean’s deep, you know?”

One of those who foresaw the inevitable Zimbabwe-fication of South Africa was Your Humble Narrator, who had inherited his longtime family tradition of cowardice (see:  fleeing France for the Dutch Cape to escape the persecution of the Huguenots), and thus took his own gap to these United States in the Great Wetback Episode of 1986, deep Atlantic Ocean notwithstanding.  And so did quite a few others, Longtime Friend Trevor actually beating me here by a few months.

Since the Mandela Honeymoon, South Africa has of course continued its own steep plummet into Darkest Africa, and the flood of Gappers has increased, not just to the U.S. but also to Canuckistan, Oz and even to Britishland (for those fortunate enough to have British passports).

I told you all that simply so that I could show you the latest Gappers, who happen to be the twin nieces of the late Princess Diana, and who grew up in Cape Town.  Ladies Amelia and Eliza have landed in London for good (Brit citizens, natch), and I’m fairly sure they’re going to do well, having been blessed with good looks, excellent dentistry, breeding and no small amount of Spencer cash. 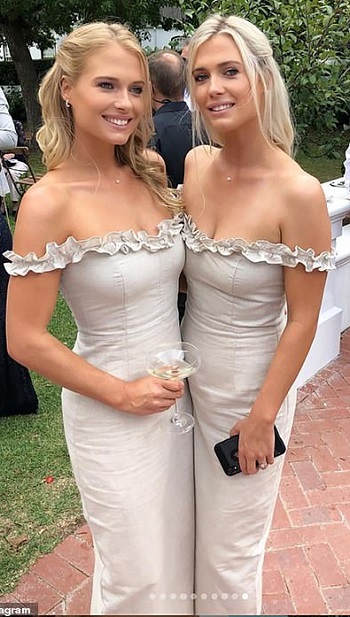 Of course, if they follow what seems to be the new norm in upper Brit society, they’ll no doubt soon be enamored of the usual crowd of tattooed rappers and malcontent European footballers of questionable descent.

Call me cynical, or realistic.