I have to say that while I’m intrigued by this new cartridge development, I’m more than a little skeptical, in principle: 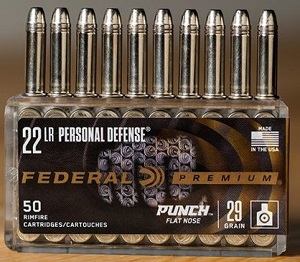 The concept comes from the fact that people have carried .22s for personal protection for generations. After all, the cartridge dates to the 19th Century, so why not actually provide said mouse gun users with a valid option to stoke their carry piece with?
“We’ve talked about making a 22 LR defensive load for some time. We finally decided that people are already carrying 22 LRs, so we might as well build a .22 bullet optimized for protection,” said Compton. “After much research, we decided that for a .22 LR defense bullet, penetration was more important than expansion.”

Watch too the embedded video from .22Plinkster.  (When he says “Stanger”, he is of course referring to the venerable CCI Stinger.)

Ordinarily, I would dismiss the entire concept out of hand, mostly because if you shoot someone with a little-bitty 29gr (!) bullet, he’s going to get really angry at you once he realizes he’s been shot.

However, I want you to note how quickly Dave was able to get the shots off, and how accurate he was because his target reacquisition time was minimal.  And here’s the thing.  I once taught a lady how to shoot (hi, Dee!) and after a single one-hour training session, she was able to empty a 10-round magazine into the head of a silhouette target in about 2.5 seconds, at seven yards.  While a single round of .22 LR may not stop a goblin, I would suggest that five or six (let alone ten) rounds of .22 buzzing around in his skull cavity like angry bees may cause a change in his plans for a weekend picnic.

And going back the Plinkster’s video, note the penetration and wound cavity made by the Federal Punch bullet fired from a longer-barreled handgun, which is what I’d choose over a 2″-barreled mouse gun. 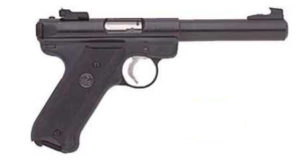 I’m not going to drop the 1911 and start carrying a Ruger .22 pistol anytime soon, of course.  But if it ever comes to the point where I’m too old and feeble to work the 1911’s slide and handle the .45’s recoil, you can bet that there’s be some kind of .22 handgun strapped to my wheelchair.

Because any gun is better than no gun.

Update:  Peter Grant agrees with me.