Let me say upfront that during my lifetime I have introduced my family members to addictive substances of one kind or another.  Son&Heir is addicted to Rowntree’s Fruit Pastilles, Daughter cannot resist Fry’s Turkish Delight, and so on.

But probably no other addictive substance has been so fully embraced by the entire family as the beer shandy.  It’s never been an American thing, but all over the British Empire it is consumed by the gallon, especially in hot countries like in Africa, India or Australia — and in summertime Britishland, it’s a staple.

Okay, Kim, my Murkin Readers ask, what is this strangely-named beverage?

Literally, it’s quite sample:  lager mixed half and half with “lemonade” (actually, Sprite or 7-Up).

Now before everyone heads to the john for some upchuck, let me give you a little case history.

I was walking though Covent Garden with Connie lo those many years ago, and it was quite a warm day.  So we stopped at a corner store (7-11 equivalent) and were browsing through the drinks fridge when I saw this: 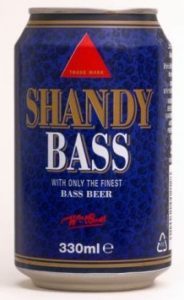 “You have to try this,” I said.
“What is it?” asked my American wife.
“Beer and… 7-Up.”
“Ewwwww.”
“Tell you what.  I’m getting one for myself.  Have a sip, and if you like it, I’ll get you one for yourself.”
[tentative sip], then “Oh my God!  Why have you never made one of these for me before? ”
And we ended up having two with our sausage rolls, and getting a six-pack for the hotel room.

When we introduced our kids to the shandy back home, there was much joy and praise-singing of how wonderful we parents were, and it became a staple drink whenever we went over to Britishland, as well as at home.  (Every time I went to out Brit food store, I had to bring back a six-pack or two — until that got too expensive and I started mixing our own.)

If 7-Up/Sprite is too sweet for your taste, then use ginger beer or even ginger ale instead.

The beauty of the shandy is a many-splendored thing, so to speak.  It has low alcohol content, and if you mix it yourself, you can alter its strength simply by changing the formula to suit your taste.  (I myself prefer a 30-40% beer mix, simply so I can drink more of it.)  And it is an excellent thirst-quencher on a hot day.

Anyway, I told you all that so I can tell you this.

Of course, in this age of recipe tinkering, to the extent where we now get strawberry-flavored beer and chocolate-flavored vodka (okay, now you can go and throw up), it would only be a matter of time before some assholes decided to screw with the venerable beer shandy.  And indeed they have:

Shandy is currently undergoing an unlikely revival: part of a boom in ‘nolo’ (ie no or low-alcohol) beers, wines and spirits that has seen sales rise 50 per cent on this time last year.
It didn’t take long for canny manufacturers to realise they had a lucrative market on their hands.

And you can read the results for yourself.  (My favorite:  “It reminds me of the inside of a grandmother’s handbag — a distillation of scented tissues, Parma violet sweets and talcum powder.”)

You’re better off sticking with the classic mix:  ordinary lager (or a darker beer like a red ale, if your taste runs that way), and 7-Up (Sprite is too sweet, even for me) or Canada Dry ginger ale.  And stay away from the so-called “light” beers, because they don’t need to be watered down any more.  Ditto any craft beers, because as with any premium drink, diluting it takes away most of its character.

Amazingly, the beer I’ve found that mixes best with 7-Up is an old favorite of many people, Pabst Blue Ribbon.  (I wouldn’t drink PBR by itself for a bet, but it makes a better-than-average shandy, and it’s cheap too.)  So go ahead:  have some fun. 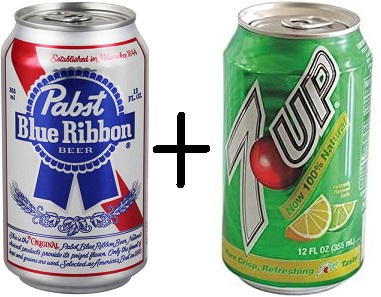 And don’t come running to me if, like my family, you end up semi-addicted.