For the past four days I’ve tried to play my bass guitar — trying to push through the agony of Olde Phartte joint pain, hoping that with regular practice I could fall into playing it for fun again.

No such luck.  In fact, Day 4 (yesterday) was so bad that I quit after an hour. 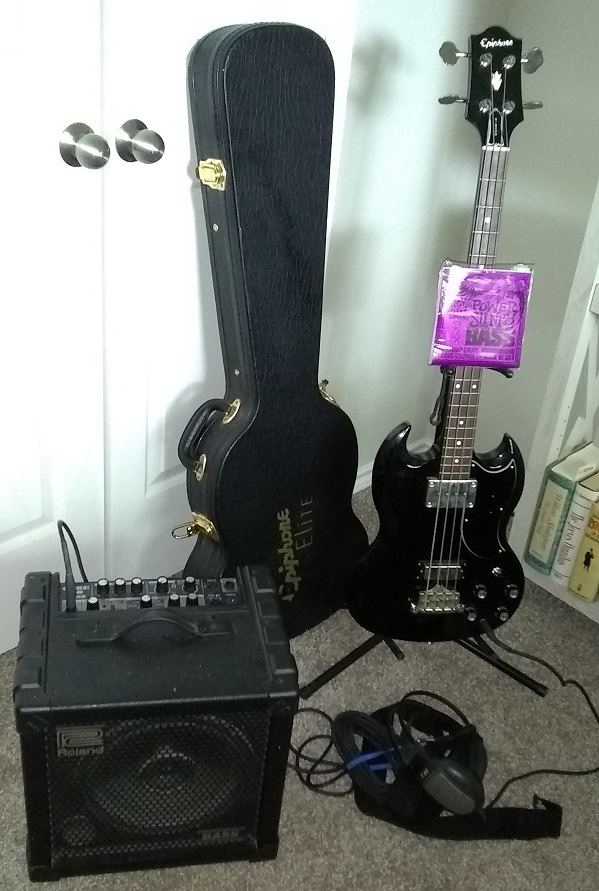 The only mod I made was replacing the utterly useless rotary pickup selector switch with a three-way (bridge, neck and bridge&neck), because the POS rotary broke after a month or so’s gentle (i.e. home) use.  Otherwise in as-new condition.

Price:  Sweetwater has them at $400;  I’m asking $250 plus whatever shipping is required.  (N.Texas residents will get it dropped off at a place of their choice.)

For reasons best known to themselves, Roland discontinued this little sweetie.  I just wish I’d had it as a gig amp instead of the monster I used to slip discs putting into the van.  Everything works as advertised.

Price:   as it’s been discontinued, the closest equivalent I can find is this Ampeg, which is also solid state and 40w, with a 10″ speaker, but with no COSM features.  Guitar Center sells it for $150;  I’ll take $100 for the Roland, plus shipping.  (Same deal for N. Texans.)

So:  $350 for a bass/amp gig setup which quite frankly would have served me well in my misspent yoot.

Let me know by email ([email protected]) if you’re interested.  I’d prefer to sell them as a package, but that’s not set in concrete.  (BTW:  I don’t haggle, unless we’re talking about an exchange for a .22 rifle or pistol of similar value which is taking up needed space in your safe.)

Update:  I found a good home for the gear:  a young lady heading for a college music school.