Via Insty, I read this:

Stephen Collinson is well-known among conservatives as the most hackneyed of the hacks at CNN. The CNN Politics Twitter account promoted his latest online essay with the words “President Biden to showcase his moderate radicalism in his big congressional address.”
“Moderate radicalism”? Doesn’t that make about as much sense as “quiet loudness”?

Well, no.  Basically, “moderate radicalism” is when radical ideas and positions (i.e. extreme leftwing, in this case) are talked about and explored, but there are no actions associated with the activity.  Here’s an example:

“Racial equity is going to be our social goal and policy”  —  moderate radicalism.  Then there’s this:

“Racial equity is going to be our social goal and policy, and anyone not supporting it will be sent to reeducation camps”  — that’s pure (immoderate) radicalism.

Just don’t kid yourself that the latter is an impossibility in these here United States. 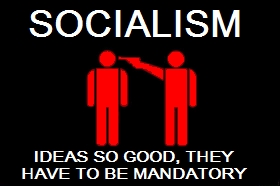 Never forget that socialists, of whatever variant, are utterly convinced of the rightness and purity of their ideas, and that opponents thereof are evil and should be suppressed, by force if necessary.