I found this linked SOTI (can’t remember where, sorry): 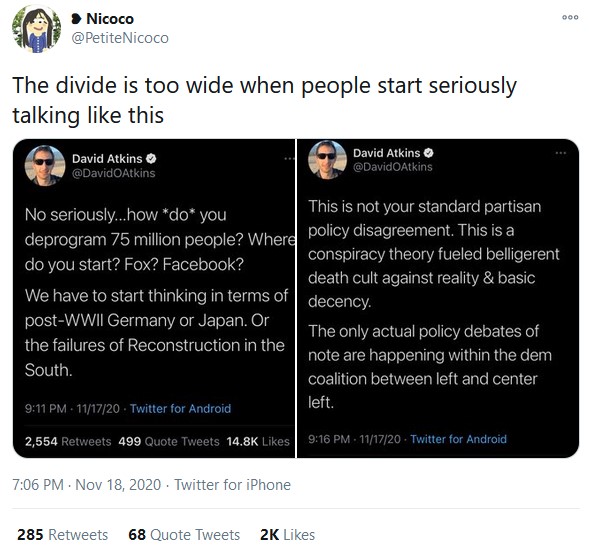 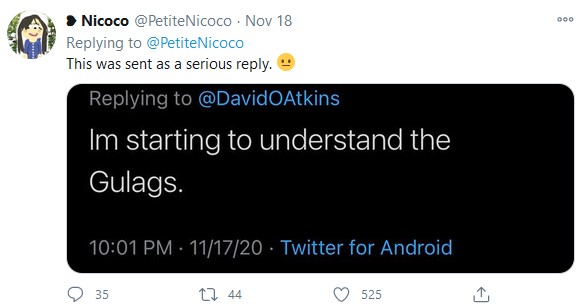 Now I don’t know who these people are, but they sound seriously unhinged.  I’m trying to see how any rational person could define supporters of a Manhattan businessman (and one-time Democrat) as a “conspiracy-fueled belligerent death cult”.  Taking each word in turn:

What conspiracy?   The only people who have been obsessed with conspiracy have been Leftists — Russia, Ukraine — and this despite the fact that the real conspiracy has been by ex-Obama staffers, the various intelligence services and government bureaucrats against President Donald Trump.  Sheesh, just the Strzok-Page email exchanges alone are proof of that, and there’s so much more that I barely know where to begin.  This does not exist in the imaginations of Trump supporters:   it’s all been exhaustively documented — and despite that, Trump has only fired a few of the more egregious offenders, and prosecuted not a single one, not even the most obvious transgressors like Hillary Clinton (having a private — and illegal — email server while Secretary of State) or John Brennan (leaking classified information).

Belligerent?  Who’s talking about gulags, about the State coming to confiscate guns from private citizens?  And who is rioting in the streets, demanding to “burn it all down” and “destroy America”?  Trump supporters?  I wish we were that belligerent.  Every single act of belligerence — from attempting to assassinate a Republican Congressman at a ballgame, burning and looting, and threatening the lives and livelihoods of people working in the current Administration — has come from the Left.  Who screams invective at restaurant patrons, demanding support for the self-confessed Marxists at Black Lives Matter?  Not Trump supporters, for sure.

And a death cult?  What fevered imagination came up with that one?  Where are the Trumpian suicide squads, the Trump-sponsored bands of thugs roaming the streets and beating up political opponents, the conservatives en masse bellowing “Death to Marxists”?  (Although sometimes I wish we would, if only to drown out these assholes’ endless screams for a minute or two.)

No.  All the above are activities engaged in by the Left.

Ask yourselves this:  are these people to be taken seriously?  I mean, it’s all very well for lone loonies like this David Atkins to call for mass “deprogramming” pogroms (taking a leaf from the Stalinists of the 1950s, who must be nodding their gray heads with satisfaction from that Great Collective In The Sky).  But didn’t a former Cabinet Secretary (the snarling dwarf Robert Reich) first suggest some foolishness like this?  Is this suggestion of Atkins about to become policy, if Biden ever becomes President?

Just the magnitude of such an undertaking is astonishing.  Let’s remember that upwards of seventy million people either voted for Trump, or else were motivated to vote against “whatever it is that you Leftists want to implement”:  open borders, high taxes, gun confiscation, wealth redistribution, “hate speech” (we already have “hate crimes”), civil unrest and all the other foulness that the Left has been supporting and threatening for the past fifty-odd years.

But when a massive segment of the population says in no uncertain terms, “We don’t want that, because such lunacy has caused death, destruction, poverty and misery in every single country it has been implemented”, then we — all 70 million of us — are the ones in need of “reeducation”?

These twerps are getting worked up into a frenzy — anyone who’s ever had to deal with a thwarted child’s growing tantrum recognizes this progression all too well — and this unreasoning hatred towards people who reject their political philosophy is simply setting up a situation for bloodshed.  As much as we conservatives are called “Nazis” by the Left, the plain fact of the matter is that this demonization of political opposition has its roots in the Left:  whether by the Jacobins of Revolutionary France or by Hitler’s own National Socialist Party, we all know from their example that the elimination of political rivals begins with dehumanization and demonization.

My biggest fear, and it is very much a fear, is that the Left have been building themselves up into a febrile frenzy, and at some point, it’s going to burst into mass violence towards us conservatives.

And while we may chuckle and load up our spare magazines, I’m pretty sure that few of us want that mayhem to actually come to pass.

But I think they do, because when fanatics see that they’re losing, they often choose self-sacrifice as an alternative to failure.

And we’re the “death cult”?