Joel Kotkin, one of my favorite writers (among so many) at the estimable City Journal, has described the “watermelon” (Green outside, Red inside) mindset perfectly:

The Left’s fixation on climate change is cloaked in scientism, deploying computer models to create the illusion of certainty.  Ever more convinced of their role as planetary saviors, radical greens are increasingly intolerant of dissent or any questioning of their policy agenda.  They embrace a sort of “soft Stalinism,” driven by a determination to remake society, whether people want it or not—and their draconian views are penetrating the mainstream.  “Democracy,” a writer for Foreign Policy suggests, constitutes “the planet’s biggest enemy.”

And right there, in that last quote, is the whole game given away.  As Kotkin observes, most people outside the wealthy and academia are hugely skeptical of the whole “global warming / -cooling / climate change” movement because they have correctly deduced that regardless of all those laudable intentions to “save the planet”, the final costs of doing so would be catastrophic for their own livelihoods and prosperity, e.g.:

Imagine what will happen if a President Elizabeth Warren bans fracking in places like Texas, North Dakota, Ohio, West Virginia, and Pennsylvania;  in Texas alone, by some estimates, 1 million jobs would be lost.  Overall, according to a Chamber of Commerce report, a full ban would cost 14 million jobs—far more than the 8 million lost in the Great Recession.

Confronted with the abject failure of Communism everywhere it’s been put into practice, all that’s left for these would-be Stalinists is to try to bypass democracy and enforce their control over the population by diktat  — the very definition of Stalinism — using climate change as the fig-leaf.

I’ve written about this topic so often I’m starting to bore myself;  in Maskirovka (2017) and Proper Analysis (2019), to list but two of the more comprehensive posts, I outlined the eco-freaks’ mindset and the (failed) accounting behind the move to curb “greenhouse gases” respectively.  And of course, on any number of occasions I’ve debunked the junk statistics (which Kotkin derisively calls “scientism”) that these Marxists are using to try to give their loony theories some form of respectability.

Make no mistake:  these control freaks and their lickspittle fellow-travelers in the mainstream media are not going to quit.  We’ve already seen how has-been President Urkel’s EPA passed regulations which furthered the goals of the watermelons, stopping or delaying fracking, construction of new pipelines and so on.  Expect the same, or worse, from future Administrations run by Communists of the Warren / Sanders / [insert socialist candidate here]  ilk — which is why these bastards need to be implacably opposed at every turn, whether in local / state government, Congress or the White House.

Now, more than ever, is the time when we need to deny them ever getting their hands on the levers of power because once they do, it won’t just be your guns they come after:  it’ll be your cars, your jobs and your money.

And after they get into power via the much-maligned democratic system, don’t expect them allow themselves to be voted out of office too easily, either.

Under the Communists, the First Amendment will increasingly come under attack (“hate speech”), ballot boxes will get stuffed (by illegal immigrants), and regulations will be promulgated which bypass the legal system.  And if that little shit Beta O’Rourke did nothing else, he announced with absolute clarity these would-be Stalinists’ intentions towards the fourth  box.

I can’t put it any clearer than that.

In the past, I’ve treated Nov 19 (National Ammo Day) and April 15 (Buy A Gun Day) as two separate entities.  That time, I think, has passed. 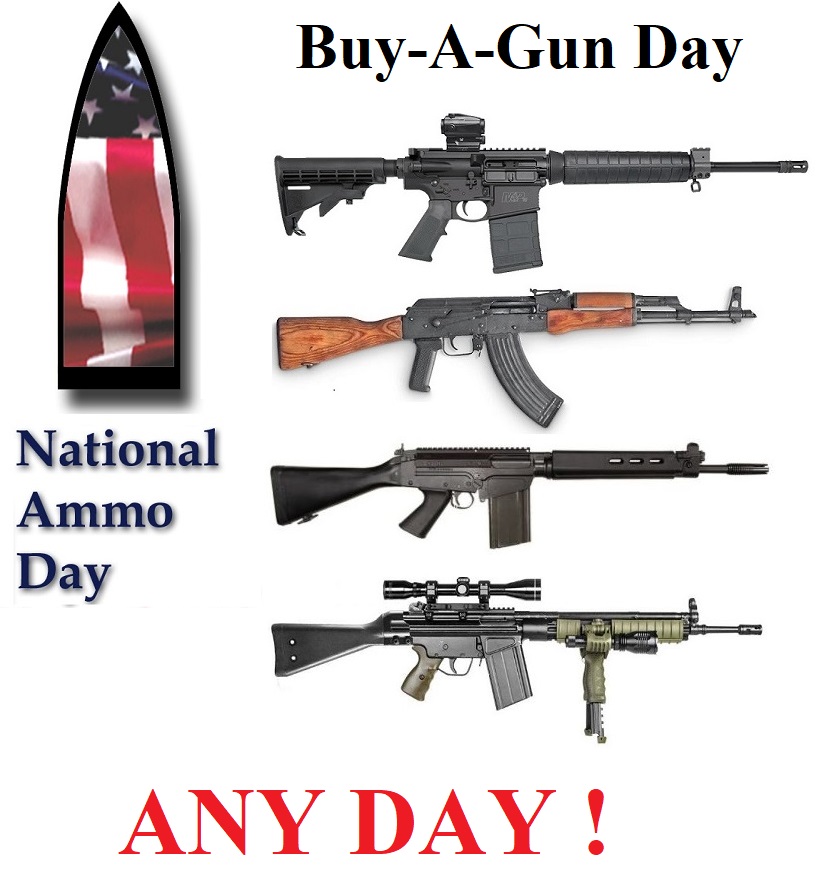 Not that my Readers would need any reminders or encouragement, of course…