Possibly because my Sensitivity Antenna isn’t dialed up to 11, I actually don’t think this cartoon is So Bad It Causes Cancer: 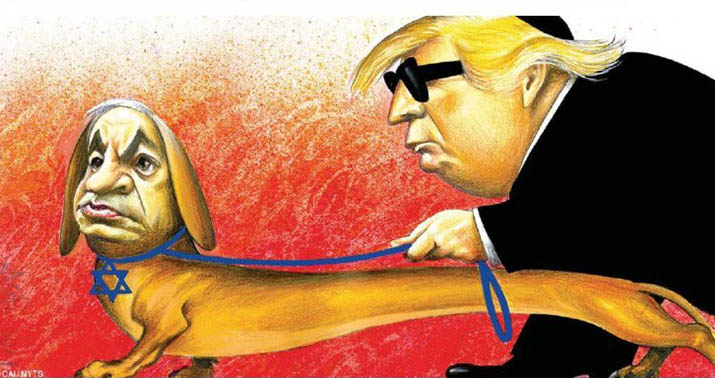 When I first saw it, I saw an attempt to paint the (blind) Trump being guided (in his foreign policy) by Israel’s Netanyahu.  I thought the cartoon was stupid, but not especially offensive.  Stupid because it paints Trump as a Jooo — or a Joooo-sympathizer — by wearing a yarmulke*, when he isn’t Jewish at all — and because it uses a dachshund to represent a guide dog.  (Why a dachshund?  Oh yeah, a Lab / Alsatian is a big dog, and we can’t have Israel represented by big, powerful dog, can we?)  Like I said, it’s stupid, and it’s also kinda simplistic.

It’s also not true.  But that’s unimportant.  If truth was important to cartoonists, then Ted Rall would be mopping floors at the Hollywood YMCA.

Is it inflammatory?  Of course it is:  that’s generally the whole purpose of political cartoons.  Is it anti-Semitic?  Maybe if you’re ultra-sensitive to anti-Semitism — which, by the way, I usually am — but to my eyes, the cartoon is clumsy, the cardinal sin of cartooning.

And OMG!  the cartoonist had a Jew represented by a DOG! (Shades of Julius Streicher everywhere! ) — well, what other animal could he have used?  Last time I looked, there was a distinct shortage of guide-cats, guide-bears, guide-pigs (now that  might actually have been anti-Semitic) and seeing-eye squirrels around.

Was it a sin for the poxy New York Times  International Edition to publish the thing?  No more than it was sinful for the Danish Jyllends-Posten to publish their Mohammed cartoon.

And we all know who got so bent out of shape about that.

Here’s my First Amendment take on the whole episode:  the more a media outlet publishes bullshit (anti-Semitic, anti-Black, anti-male whatever), the more it can be identified for the disgusting piece of shit that it is.  In this case, the New York  fucking Times stands exposed for being horribly anti-Israel (Zion) and anti-Semitic (the two are not  the same, although Anti-Zionism is generally the camouflage behind which anti-Semites lurk).  And the fact that it published the cartoon in its international edition simply shows me how anti-Semitic the Europeans continue to be (Europe accounts for a large proportion of its sales), and is very much of a piece with all the shit their editorial pages contain on a daily basis.  (Today, Jews;  tomorrow, Christians;  the day after, gun owners… and the band plays on and on.)

What’s delicious about this is that the oh-so politically-correct NYT  (which, by the way, has more than a few Jews working for it, and was once even owned  by Joooos) is being crucified [sic]  at the altar of its own political correctness.  It is, as my kids say, to LOL.

I don’t buy for one moment that the stupid cartoon is going to fuel the fires of anti-Semitism, or give cover to anti-Semites to perpetrate atrocities towards Jews, any more than the Mohammed cartoons would cause the same among anti-Muslims.  All this is a classic case of ultra-sensitivity in the Snowflake Age, where everyone is triggered by someone saying “nigger”, “rag-head”, “fag”, “cunt”, “lesbo”, “trannie” or even “snowflake”, and the minute one says anything outside the P.C. canon, one will immediately be labeled a Nazi or [shudder]  a “hater”.

I’m more upset that the P.C. “priesthood” seems to have tossed anti-Semitism out of its canon.  (Does this make them  Nazis?  Discuss. )

But hey, sooner or later (and I suspect sooner), everything we say or think will be streng verboten… which is what the totalitarian mental midgets in government, academia and the mainstream- and entertainment media are aiming for anyway.  Otherwise, how else can they control us?

Here’s my opinion of the whole stinking outrage:

I’m so sick of the Perpetually-Outraged, of whatever persuasion, deciding what can and can’t be said.  They’re children, the whole fucking lot of them.

*to me, “kippah” (the way I pronounce “kipper”) means kippered herrings, such as what one has for breakfast 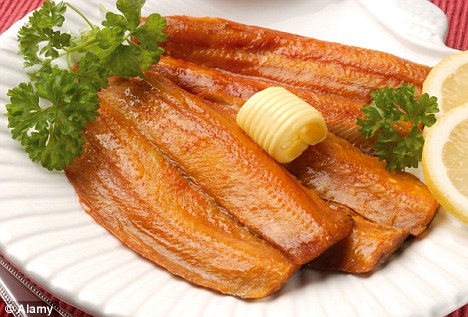 I grew up calling the Jewish skullcap thingy a “yarmulke”, and that’s what I’m going to continue to call it.  Otherwise I’m going to think of observant Jews wearing a smoked fish on their heads, and giggle.