As Mr. Free Market puts it, “The French have always been revolting, dear boy”, but this latest round of mayhem is outstanding, even for the French.

Violence has erupted again in Paris today as masked protesters stole an assault rifle from police, clashed with riot squads and set fire to cars and Christmas trees on the Champs-Elysées in furious demonstrations against the French government.
Riot police sprayed tear gas, fired water cannon and stun grenades and pulled out their batons to fight back against ‘Yellow Vest’ protesters who occupied the famous boulevard and graffitied the Arc de Triomphe.
Police said 80 people had been injured in clashes, including 16 security officers, and 183 people arrested as more than 5,000 demonstrators brought chaos to Paris for the second week running.
Masked and hooded protesters hurled crowd barriers at police in Paris and this evening stole an assault rifle from a police car in the city centre.
Meanwhile there were further rallies spiralling across the country, spreading to Marseilles, Biarritz and Antibes on the Mediterranean coast and even into the Netherlands.
The protests, named ‘Yellow Vest’ after drivers’ high-vis jackets, began last month amid fury over rising fuel prices but have mushroomed into an all-out challenge to Emmanuel Macron’s presidency.

Of course, they being French, there’s a certain element of style to the thing, even when burning the place down: 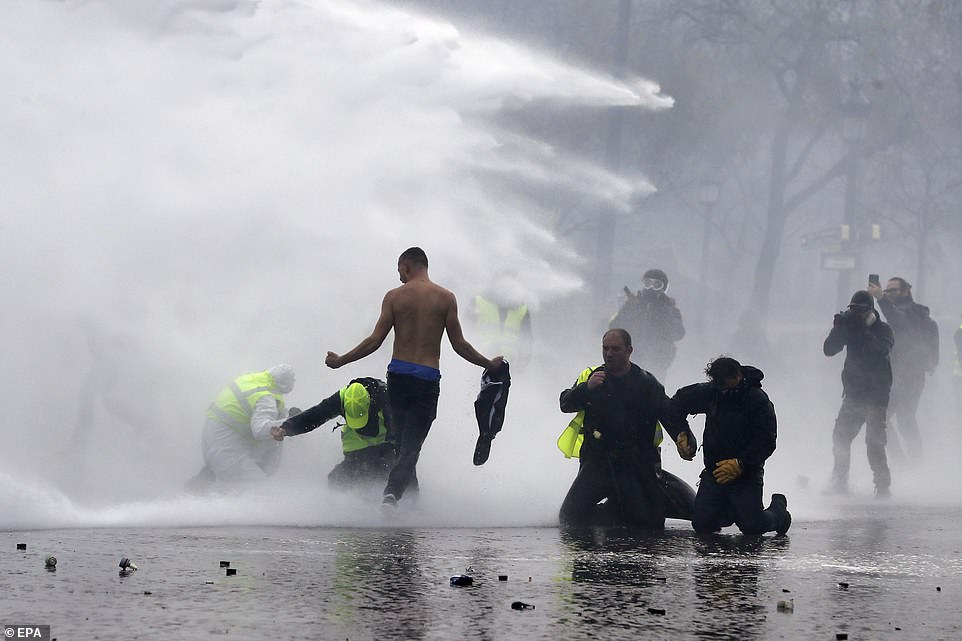 However, as my old buddy Erik at No Paseran! puts it, it’s more than just higher fuel prices which have got the Frogs miffed:

It is not wrong to say that the demonstrations were caused by the government’s decision to raise gas prices. What is missing is that this is just one of several draconian measures dating back half a year, i.e., ‘tis the proverbial straw that broke the camel’s back.
For the past four to five months, the French government has done nothing but double down on bringing more and more gratuitous oppression and more and more unwarranted persecution measures down on the necks of the nation’s drivers and motorcycle riders.

Read the rest of it, because it’s quite obvious, when you follow the whole sequence of incremental governmental bastardy, just whence the burning anger came and why the French riots, unlike those pitiful pantomimes performed by our own Pantifa snowflakes, are so well supported by the French people en masse.

Good for them, I say.  Now, if I may be a little old-fashioned for a moment, let’s hope that the next scenes will show Frog politicians being carried in tumbrels to the waiting guillotines.

The Frogs always overdo things;  it’s one of their most endearing traits.