This article (via Insty, as usual) made me chuckle.

Having three airports in Washington is great. Until you go to the wrong one.

Having a super-abundance of airports is considered a big-city perk in Washington, as in New York, London and other major hubs. But with greater choice comes a greater chance that you will find yourself at, say, National Airport while your flight is boarding at one of the other two, Washington Dulles International or Baltimore-Washington International Marshall.
…
Online search engines are making the confusion worse. Shoppers using the airport code WAS often get a mix-and-match low-fare flight that sends them out via one airport and returns them to another. Cars get stranded and, sometimes, so do fliers.
“We see people getting deals on the Internet and having no idea that DCA and IAD are two different airports 35 miles apart.”

That hasn’t happened to me, yet, with our Dallas-Fort Worth and Love Field airports, but it’s only a question of time. Their airport codes are DFW and DAL respectively, so there are any number of possibilities for someone to screw up eventually. And even though they’re relatively close together — 20 miles or so — the highways connecting them are among the busiest in the U.S. even without any road construction: and there’s always some construction going on somewhere.

With DFW, you absolutely have to have the correct terminal information — the gate number within the terminal is helpful, but you can get by without too much hassle if you don’t. I did have one airhead woman from New York ask me to take her to DFW, and when I asked her which terminal — sometimes that will determine whether you take the North or South entrances to the airport, even — she said brightly, “Oh, just drop me off anywhere in the airport; I’ll figure it out.” 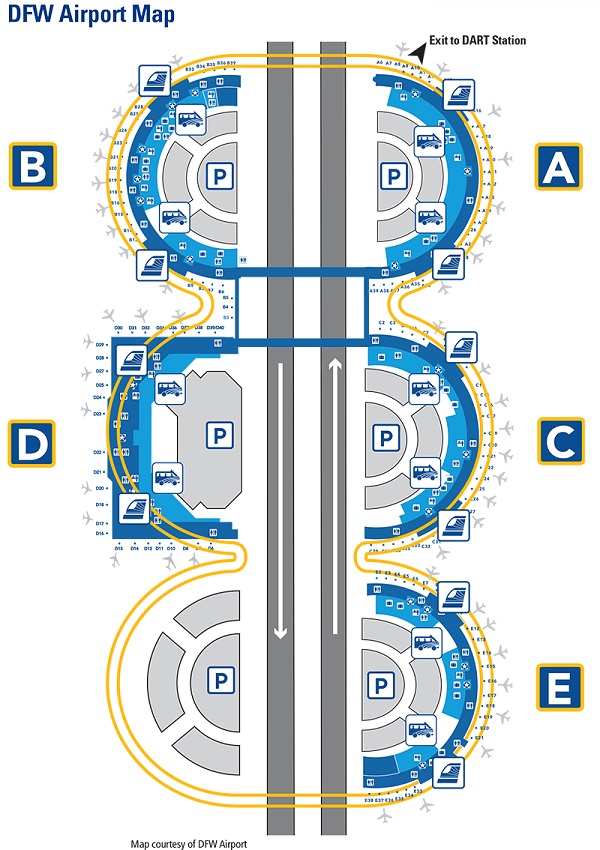 Now let’s be honest: Evil Kim might just have dumped her at Terminal E (the most remote and also least-patronized of the terminals) and gone on his merry way, but this time the old rascal stayed in the background while I explained to Miss Upper East Side that this wasn’t LaGuardia (which is small because it’s squeezed into an island and against the sea), there is no pedestrian connection between terminals, and it could take her up to a quarter of an hour to get from one terminal to another at the far end of the place, if the inter-terminal rail- or bus service was working at its maximum efficiency. (Frequent visitors to DFW can stop laughing, now.)

And she had a large suitcase and carry-on bag. I could have sold tickets just for the entertainment value. Anyway, she looked it up and lo! Terminal A. So all ended well.

I myself have made the mistake (in my private, non-Uber capacity) of going to pick up people at DFW when they were in fact coming into Love Field — and only my memory saved it from being a total disaster, when I remembered, too late, that Virgin Atlantic doesn’t fly into DFW, only into Love Field. (They were relatives, so I didn’t get spit-roasted or impaled on a spike.) That said, I did make it from DFW to Love in record time…

One last funny story about the Dallas airports. Last week I arrived at a near-downtown hotel to pick up an older woman, and asked, “Love?” whereupon she smiled and said, “Maybe. You offering?”

I haven’t blushed like that since I was a teenager.

Afterthought for my International Readers:  if you’re arriving in DFW and flying on to another U.S. destination, always make sure that you flying into DFW and out of DFW (and not out of DAL). Also, when you book your ticket into DFW, make sure that your outbound flight is at least three hours after your scheduled arrival, because while international flights all land in Terminal D, your connecting flight can leave from just about any terminal in the airport. And you have to go through Immigration (a long wait), get your luggage off the carousel (an even longer wait) and then stand in a long line to re-check it for the domestic flight. Also, DFW has some of the worst signage of any Western international airport I’ve ever flown through, and their public “service” announcements in Baggage Claim usually sound as though someone’s gargling raw eggs through a fast-revolving tennis racquet, delivered (usually) by someone who sounds retarded, speaking with an incomprehensible Hispanic- or Ebonics accent because diversity.

My advice is to connect through Atlanta’s Hartsfield (ATL), as long as you know that Delta flies into both DFW and Love Field. I hope this helped.