Whenever some gangster / gangsta tool is confronted by the police, it seems de rigueur for said idiot to “represent” (i.e. show no fear, but indeed the utmost disrespect towards the “po-po”). This usually ends with said idiot getting shot, or at least having a paradiddle drumbeat played on his fool head by a cop’s nightstick. [Pause to let the cheering die down.]

Well, in planning my upcoming invasion of errr sabbatical in Britishland, my several Texas friends have berated me most foully for not representing… Texas. Apparently this means showing up at Heathrow in full Texas regalia (minus the nickel Colt Single Action Army revolver, of course, which is the one thing I would like to take with me, but of course cannot do lest some Brit rozzer ends up playing a paraddiddle with his nightstick on my fool head).

For those not familiar with Texas folkways, allow me to offer a simple explanation. Texas regalia is (at least) a 10-gallon 9x beaver Stetson, a silver belt buckle which could serve alternative duty as a riot shield or serving dish, a tasseled jacket in the manner of John Voight in Midnight Cowboy, a string tie, something called “boot-cut” jeans, and intricately-stitched cowboy boots with leather in at least two (and three is better) different colors, with silver toe guards and fanciful stitching.

I don’t even own a pair of jeans.

So today I went out shopping for what I consider the least visually offensive of the above list of deplorable regalia items. Of course, sending me out to buy this stuff is like sending Lewis Black out to buy an assault rifle, but what the hell: anything to avoid being a bad ambassador for the Great State of Texas, right?  After a full day’s shopping, I came home with a pair of these: 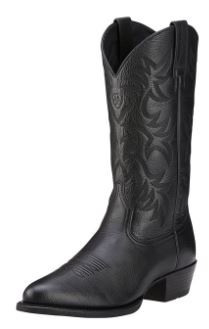 Yes, it’s the [deep breath] “Ariat Western Heritage Round Toe” style, as pictured, in one color (black) and with what is regarded in Texas as “conservative” stitching. I’m pretty sure I’m only going to be wearing them at night, in a place with subdued or no lighting.

This, by the way, is why Sunday’s post is so woefully tardy. Finding a decent pair of cowboy boots in “Stubby Extra Wide” is one hell of a chore, especially when it seems that the only styles available in that rather esoteric size look like the cat puked on them (no offense to cats): 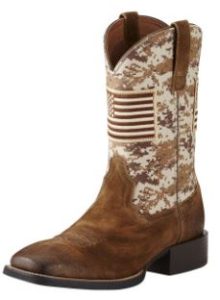 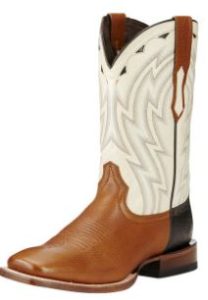 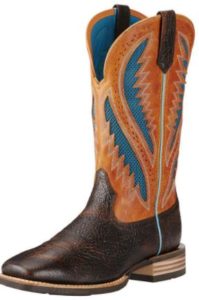 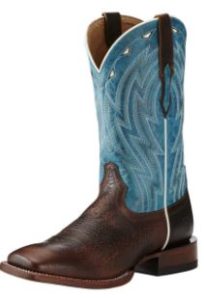 Good grief. All I wanna know is: when did cowboy boots start being designed by Elton John?

I did find a very nice-looking style, but put the sample back on the shelf like it was an angry rattlesnake when I saw the price. Apparently it was made of leftover skin from Joan Rivers’ last facelift.

So I ended up with a pair of the Ariats, which seems to be a decent brand from all accounts. (I really couldn’t afford Justin or Tony Lama, which judging from the prices must be individually hand-made by the gnarled fingers of some old guy who’s worked at Justin since 1879 or something.)

Anyway, as I said earlier, all this is to excuse the extreme tardiness of today’s post.

Tomorrow we’ll be looking at shotguns, something I actually know a little bit about.