Back when I was a consultant, The Mrs. and I went through several periods of “chicken and feathers” — wealthy one minute, impoverished the next. During the chicken times, we’d travel, treat the kids and save, but during the feathers times, we’d be in trouble. In many cases, the trouble was a short-term problem: waiting for a client’s check to arrive, or for the check to clear, that kind of thing. There was always a credit card to tide us over, and then life could resume once the funds were released.

Then there were the longer periods of feathers, such as when a couple of our start-up business ideas failed. The first cost us about a hundred and fifty thousand dollars, which we paid out of our savings; the second cost us well over a third of a million — we had salaries to pay even though no money was coming in, and on that occasion we lost everything: savings, retirement accounts, and almost, the house. (I have no idea how we averted that disaster, but somehow one of us or the other always managed to get a small consulting gig which was just enough to keep a roof over our heads, but with nothing left over to pay bills. I even had a car repossessed during this time.)

So I had to sell off my guns. Pretty much all of them went, except for a junky old 16ga side-by-side which wasn’t worth diddly to anyone, and Connie’s little NAA Mini revolver. Most of them I sold to good friends, on the understanding that they could sell the guns if they wished, but that if they did so, I could at least get first refusal, as it were. Gradually over the past couple years, I’ve been able to buy a few guns back here and there, and a couple of really good friends even lent me a gun or two to tide me over — “on the non-return basis”, so to speak, because they couldn’t bear to see my family defenseless. These angels know who they are, and I’m not going to embarrass them by revealing their identities.

I won’t go into details of each of the guns thus sold and recovered because it’s unnecessary to this story, but here’s a pic (taken on a trip to the range with Mr. Free Market many years ago) of some of the guns I had to sell: 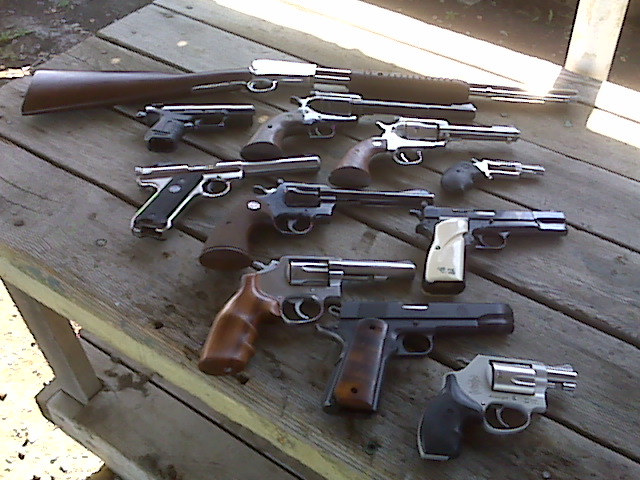 But one of those guns in the picture has stuck with me, because while it pained me to dispose of various beautiful Colts, Browning High Powers, Rugers and so on, my most anguished sale was the rifle at the top of the pic, this little thing:

To give the rifle its official name, it’s the Taurus Model 62C (.22LR) Pump-Action Carbine. To anyone who has ever shot one, its actual name is “OMG I haven’t had so much fun in years!”, always followed by a firm refusal to release the gun back to its rightful owner and a demand for more ammo.

As I’d mentioned a few days ago, I was seeking a semi-auto plinker — basically to replace this little darling — but all the time in the back of my mind, I kept thinking, “I wonder if [name redacted] would consider selling the Taurus back to me?”

You see, the Marketing Department at Taurus are basically a bunch of morons, because several years ago they decided to drop this line from their catalog — all the Model 62 variants — which meant that a replacement would be difficult to find.

Happily, my kind friend decided, after considerable and doubtlessly-tortured reflection, that the rifle’s proper place would be back with its original owner. So today I can announce that I no longer need that .22 plinker: I’ve got my baby back. It’s resting by my chair, as I write these words.

One final word of explanation is probably necessary. The Taurus 62 is a pump-action, not a semi-auto rifle. Why, then, would I not need a semi-auto plinker, still?

The answer is obvious if one knows me well: I prefer to operate machinery rather than just use it — stick shift over auto transmissions, bolt-action over semi-auto rifles, revolvers over semi-auto pistols, and so on. I get added pleasure from working an action — it’s a feeling of control which is difficult to explain, but to people like myself, all too easy to understand.

I cannot wait to get out to some open country, toss a few cans or oranges onto the ground, and start shooting. And if you want to know how much I want to do this: I’d rather do this for a few hours than spend the same amount of time in Nigella Lawson’s boudoir. Yes, that much.

And now, if you’ll excuse me, I’m not going to the range. I’m off to find some open country…