Yeah, and it’s about time.

After carrying the M16 or one of its cousins across the globe for more than half a century, soldiers could get a peek at a new prototype assault rifle that fires a larger round by 2020.
Army researchers are testing half a dozen ammunition variants in “intermediate calibers,” which falls between the current 7.62 mm and 5.56 mm rounds, to create a new light machine gun and inform the next-generation individual assault rifle/round combo.
The weapon designs being tested will be “unconventional,” officials said, and likely not one that is currently commercially available.
Some intermediate calibers being tested include the .260 Remington, 6.5 Creedmoor, .264 USA as well as other non-commercial intermediate calibers, including cased telescoped ammo, Army officials said.

All those who’ve heard me rant endlessly about the Mattel (M16/M4) rifle and its poodleshooter (5.56mm/.223 Rem) cartridge may now breathe a sigh of relief at the upcoming cessation of ranting, as the Pentagon is finally facing up to the reality that the aforementioned were inadequate pieces of shit that our kids should never have had to carry into combat.

I really have no input into what rifle/machine gun/”delivery platform” the Army is going to implement, other than I hope its an adaptation of an existing, proven design — “ground-up” (i.e. wholly-new) designs are generally shit unless created by John Moses Browning (BBUHN) — but considering that the Army always has to dabble with the new-and-untried (because otherwise how else could they kill more of our troops unnecessarily?), I’m probably wasting my time.

As for the cartridges: Doc Russia and I had a long and detailed discussion about this topic. I like the .260 Rem because of its meaty energy at 500 meters, while he likes the 6.5 Creedmoor because of its proven accuracy — as he says, all you need for a combat round is accuracy, range and power. Any half-decent quarter-inch- to 6.8mm bullet with a mass of about 140-150gr will do the job, almost without exception. Here are two of the cartridges mentioned in the article (from left to right), the .260 Rem (142gr) and the 6.5 Creedmoor (140gr): 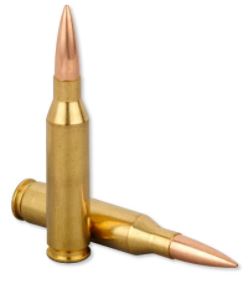 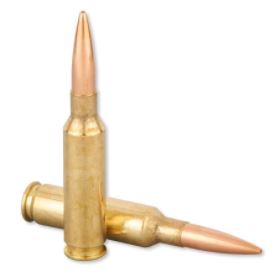 Either would be an excellent choice, and there’s absolutely no need for the Army to come up with any new cartridge. Why? Because over the past century of cartridge design, just about everything has been tried and tested, and quite frankly, the answer is already out there e.g. with either of the above cartridges.

All the talk about the need for a bullet to penetrate body armor is mostly silliness, by the way. If you’re hit at short range in the body armor with a high-velocity medium-caliber bullet, the bullet will penetrate any armor, and even if it doesn’t — say, with a glancing blow — the impact is most probably going to knock you unconscious and/or cause massive internal trauma — broken ribs, collapsed lungs, etc. (Steel-core 6.5x55mm Swede — my favorite of all medium cartridges ever made —  can blast straight through both sides of body armor at 300 yards, but it’s not an optimal cartridge in today’s world because of its weight and length.) Penetration is also a moot issue because anything would be better than the current poodleshooter 5.56mm cartridge, which can barely penetrate drywall at 300 yards (some hyperbole there).

Regardless of the bullet size, though, I love the idea of lightweight polymer cartridge cases — brass is great but heavy, relatively speaking — and the Army doesn’t reload, so polymer seems to fit the bill. And brass is a commodity metal, prone to supply shortages, whereas if you’re running low on polymer sheets, you just build a new factory and the problem goes away. (Of course, should the military demand for brass slacken, that could make regular ammo cheaper for the civilian market, but let me not be swayed by base personal motives here.)

I worry, of course, that too much time will be spent trying to create a perfect cartridge (to do “everything”) and the perfect rifle (with a jillion bells and whistles), instead of getting something which is a 90% solution and running with it. In truth, I think an intro date of 2020 is far too distant, and the M4/5.56mm system sucks so badly, it should be replaced now, let alone three years hence.

I welcome additional thoughts and input in Comments.