When I was testing the new Ruger Mk IV pistol last week, I’d also brought along a rifle (my AK-47) for a little practice on the side. On that side of the range at Frisco Gun Club, there are four lanes set aside for rifles in a separate part of the building. When I walked in, there were three shooters already there, all shooting AR-15s, and all the AR-15s were tricked out with red dot sights, tac rails, flashlights, telescoping stocks — you name it, those rifles had ’em. And the shooters were taking this seriously: tightening the stocks, adjusting the sights (one guy even had a spotting scope — in an indoor range) and in general, going about their business with marked intent. (When I go to the range, especially when I’m with a friend or friends, it’s more of a social occasion, and we kid around, teasing each other and what have you; that didn’t happen with these guys.)

While I was busy with the AK, two of the AR guys finished up and left, and their places were taken by two more AR guys, also with tricked-out rifles and all the stuff which would make Dianne Feinstein and Chuck Schumer have a heart attack (I wish) if they saw it. The two new guys were likewise professional and intent on tuning up their rifles, and one had a suppressor screwed onto his barrel. My plain-Jane AK looked like a muzzle-loader by comparison (but it was just as accurate, so I didn’t feel too bad).

It was the first time I’ve ever been at a range where all the other guys were shooting ARs.

Me, I was just there to make sure that my two 20-round mags were still feeding okay — any excuse for trigger time, right? — so I only popped off twenty or so rounds, then headed over to the pistol range for the real business of the day.

But I have to tell you, I really, really liked the way the AR guys were going about their business. Even though they were a bunch of individuals, they looked like a very competent citizen militia… and the whole thing smelled like freedom. I like that smell.

It looks like we’re turning back into a Nation of Riflemen, at last. 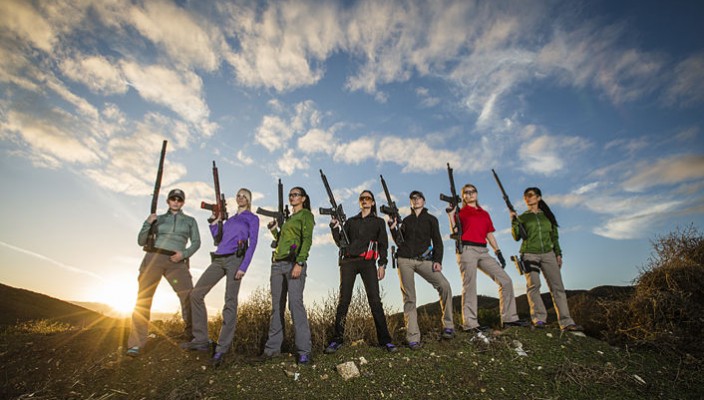 And I couldn’t be happier.

Update: I changed the pic, because I prefer the thought that women are becoming riflemen in ever-increasing numbers.