Inspired by this article (“The 15 best places to live in England and Wales revealed“), I decided to stick my neck out and list the top fifteen places to live in the United States.  Before I do that, though, I need to frame the discussion somewhat.

I have traveled around the United States a great deal, mostly on business but also on vacation and (with Longtime Friend Trevor) on trips to remind me just why I fell in love with this country.  A lot of my memories may now be irrelevant, changed by events and time, but there ya go.  (I loved Portland, for example, when I spent a week there back in 1990, but I believe it may have changed quite a bit since then.)

Also, one may love a place for different reasons.  The DM  article is very careful to state that their top 15 list is based on natural- and architectural beauty.  As we have a great deal of natural but not much architectural beauty Over Here, that’s a bit of a speed bump.  As a general rule, I’m not one to spend hours and hours at a beauty spot in awe of the countryside and whatever — I’m more likely to be found enjoying a local pub or restaurant.

Many beautiful places in the United States have hopelessly fucked-up governments, whether state and/or local.  If one were to live there, one would have to weigh the place’s benefits with the downsides.  (Carmel CA for example is one of the most beautiful places on the planet, but given the government of California, its totalitarian attitude, its iniquitous taxes and its shitty gun laws etc., would it be a great place to live?  Only if the place’s beauty is worth more than one’s personal freedom.)  Most of the government-related issues above can be referred to as “The Shit”, and I’ll be doing so as we go along.

In parallel vein, many wonderful places to live have been infested by Californians, New Yorkers, Bostonians, Chicagoans and the like, who bring their horrible habits and screw up Paradise everywhere they settle.  I’m going to try and ignore that phenomenon as much as I can, although the baleful effects of these ticks on places like Colorado, northwest Wyoming, Maine (and, well, you know the rest) can make a once-attractive place unbearable.

I am not a “country” kinda guy, to look at another aspect of all this, so living 10 miles outside Fuck, Nowhere doesn’t much appeal to me.  I like my drive to a decent supermarket to be less than 30 minutes, and the restaurant choices to be varied and fairly exotic, for example, so a town or area where “Bob’s IGA” is the only supermarket choice and “fine dining” is solely of the Applebee’s variety would not suit me.  That “not country” thing extends to beaches and the seaside in general, mostly because of the concomitant heat and humidity which bedevil places such as Florida — although there are a couple of exceptions to this, as you’ll see.

I’ve lived most of my life far away from water, whether the sea, a river or a lake — Johannesburg and Dallas, to give examples — and even when I lived closer to the sea (New Jersey) or to a lake (Chicago), I never actually saw the water, as such.  (My old apartment in Lakeview looked out over Lake Michigan, but I only lived there for less than a year.)  So I wouldn’t mind a bit of water to look at, not at all, and if no water, then I’d like a few hills sprinkled around — after northern Illinois and north Texas, I’m pretty much done with flat.

And all this assumes that I had the wealth necessary to live there — not lottery-type wealth, just sufficient funds to get by in that area.

I’m not going to rank my top 15, because while I’ve picked them, I’m very aware of their downsides as well as their attractions.  There is no absolute #1 or even #2, because all these places have significant problems for me personally, or else I’d be living there right now instead of flat, hot north Texas.  So here they are, as I think of them.

The Maine coastline, or “Down East” (as the locals call it) is one of my top choices.  I know that the winters are long and dreary, but fall and summer are priceless in this northeast corner of the continent.   The scenery is quite lovely and the ambiance is terrific, and best of all for me, if I feel like getting a little bit of foreign culture, cuisine and food, Montreal is just a few hours’ drive away.  (For the same reasons, I could live in New Hampshire, although only in a very few specific areas.)  If I’m going to be specific, I like York, Boothbay Harbor and the area around Camden — also Portsmouth NH which is strictly speaking not in Maine, but it’s not in Massachusetts either.

I’ve spoken of my fondness for northwest Michigan before — and as with Maine, there is that winter warning — but the area around Petoskey and Travis City is exquisite.  Across Lake Michigan, there’s

Door County, Wisconsin.  Although much of Door County is overrun with FIBs (Fuckin’ Illinois Bastards, as the locals affectionately call them), it’s incredibly beautiful all the same.  My only issue with DC as that the nearest city is Green Bay, and ugh.

Cannon Beach, Oregon.  I know, it’s Oregon;  but Cannon Beach is far enough away from Teh Crazies (I think) to make it a worthwhile choice.  It’s one of the very few places I’ve been to in the U.S. where I actually stopped to look at housing prices.  As was:

Coeur d’Alene, Idaho.   The city itself is not that great, but good grief, the surrounding countryside is incredible — not to mention all those lakes scattered around.  Trevor and I once actually looked into buying a cabin up there together, as a “writer’s retreat” kind of thing.

Fort Lauderdale, Florida.  All my reservations about Floriduh notwithstanding, I rather like FL, FL.  Most of all, I like the restaurant choices (seafood, steak and Cuban!) and because so many wealthy people either live there permanently or vacation there, it’s not a podunk city by any means.  Further up the coast is Boca Raton, also a decent place.  Over on the other coast, I rather like Naples, although the real estate prices are eye-watering, almost Californian if you want to live anywhere with a sea view.  The best thing about Florida is that you don’t have to run away from the weather (except of course in the case of the occasional hurricane), and July and August are in their own way as bad as January and February are in the Frozen North, so there’s that.

Afterthought:  I’ve been to several of the Daily Mail ‘s top 15;  and of all of them, I’d pick Bradford On Avon. 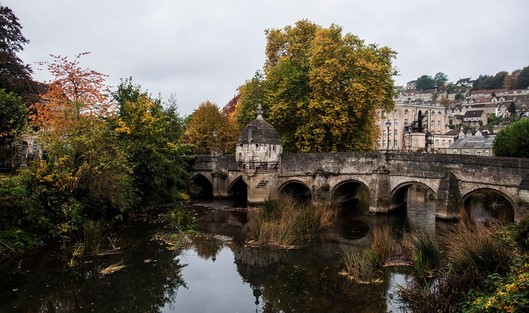 In a heartbeat.  That’s one place where I’d put up with all The Shit just to live there.