Yesterday I went off to the 100-yard indoor range to play around a little with the new rig:

…and see which ammo it likes best of all.  I have quite a few different brands / types of 6.5x55mm ammo, so picking one is no easy choice.  I decided to start with the Federal ammo, because I’ve always had good results with it, and long ago I standardized my bullet weight at 140gr because that’s what all my rifles thus chambered (there have been a few) have shot well.

Before we look at the target, I need to talk a little bit about the scope technique.

Last week, after zeroing the scope, I reset both the top- and side knobs to zero.  All “warmup” strings were fired with that scope setting, and then I’d adjust the scope (once) for that ammo, and let off another string.  While I was letting the barrel cool between the different ammo brands, I’d reset the both scope turrets to their original zero, before changing to the new ammo.

All aiming-points are the center (bull) diamonds.

Because I couldn’t take too much time — the range is always fairly busy, even on a Monday — I had to shoot a little more quickly than I normally would, which meant the barrel heated up quite a lot.  So here’s the 100-yard target: 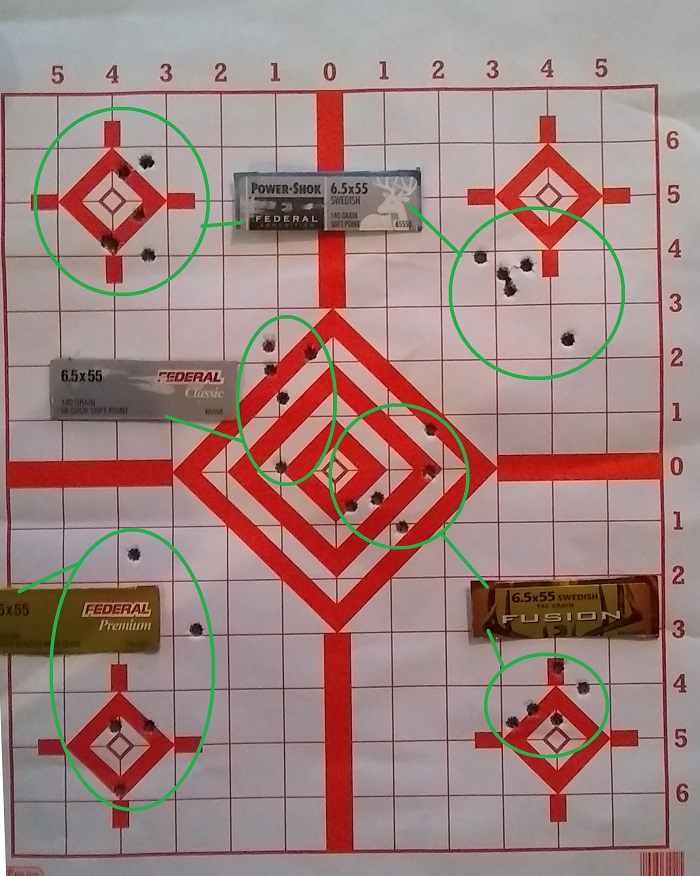 The top two targets were as follows:  the top right-hand target was the warm-up string with this type (includes a called flyer), and the top-left was after I’d adjusted the scope.  Not bad.

The large center target held two groups:  the left-hand group (with yet another called flyer) was basically the same ammo I used to zero the scope last week, and I was a little worried because my aim-point was the center diamond.  Was the barrel starting to whip?  I decided to let the thing cool for about ten minutes, and then I tried the “new” ammo I’d purchased a few weeks ago:  the Federal “Fusion”, the first string of which which is the right-hand group on the large target, and then, after scope adjustment, the bottom-right target.  Lovely. Good thing I have lots of it.  (Okay, I have a lot of all the ammo types, but whatever.)

The bottom-left target was reserved for Federal Premium “Trophy Bonded Bear Claw”, which has always given me excellent results, across three or four different rifles.  All this ammo, incidentally, has the same lot number on the boxes;  it was very carefully chosen and ordered, and it has worked consistently well.

Just not this time, with this rifle.

The two flyers were not called — in fact, all five shots felt “right” when I touched them off — and while I can live with flyers an inch or two off, these two came out of the blue, and were not the last two fired, either:  from memory, they were the 2nd and 4th in the string.  In fairness, the barrel was really hot by then, so… I ended the range session.

The reason this is so perturbing is that if I were suddenly to be called away on a hunting trip with no chance to test-fire any of the types shown, I would grab the Bear Claw in a heartbeat and head out.

It looks like I need to spend a little more time with this ammo.

That aside — and I will get to the bottom of the problem — the Federal ammo brands and types all performed well, under the circumstances.  Remember that this was really just a “rough” test — I plan on fine-tuning each type in separate sessions over the next couple months, with the scope adjustments noted.