Seems as though most wine critics and tasters are  bunch of posers who couldn’t tell a Beaujolais from a Bass Ale.

In other news, Queen Marie Antoinette was guillotined yesterday.

As an aside, I once did a couple of wine courses over a period of two weeks at the Bellingham and Meerlust estates.  During that adventure, I learned that a.) there are some people who can in fact tell the grape varietals from a sip of wine, and b.) there are only about a couple dozen such people, tops, in the entire world.  Blindfolded, most people can’t tell red from white from beer (seriously, I’ve seen a few of those challenges).

Here’s a tip when dining out and the sommelier  asks you to “taste” the wine:  don’t do it.  Pick up the sample glass, swirl it a couple of times and then sniff it cautiously.  If it’s not rancid — and you’ll know that  when you smell it — just nod and say,”That’ll do.”  If he says, “Don’t you want to taste it?” reply “I don’t need to.”  Then sit back and carry on with your conversation, ignoring him.

For extra points:  if it’s a dark red like a cabernet or burgundy, wince slightly, then tell the sommelier  to let it breathe for ten or so minutes before he serves it to the table.  (That’s a cheat, by the way;  all  reds need to breathe a little after uncorking.)

The wine world is full of phonies who like to show off.  The way to make people think you know what you’re talking about is to say less, not more.  What you do  (see above) is more impressive than what you say. 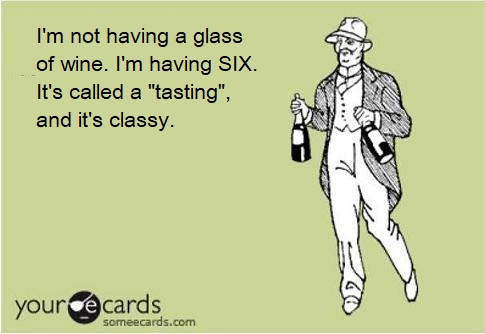