This pic at C.W.’s blog got me thinking. 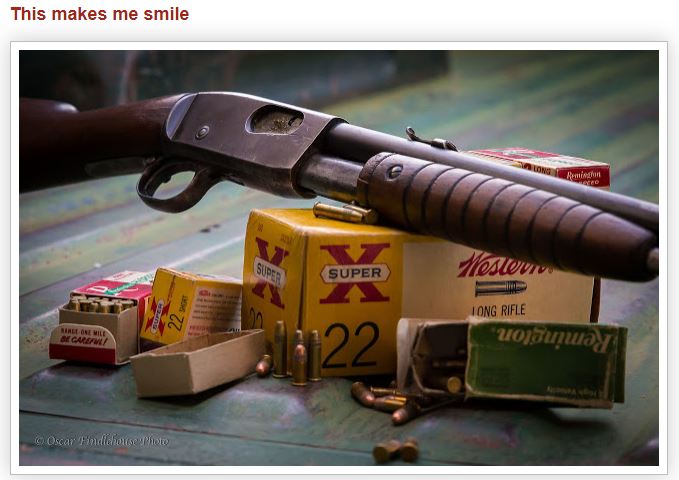 It makes me smile, too.

I have written before that men like to be in control of machinery — that many men, very much including myself, prefer stick shifts to automatic gearboxes, bolt-action rifles over semi-automatic rifles, ditto revolvers over pistols and so on.

Where we do use the auto / semi-auto doodads, it’s for practical reasons only, like buying a car with an automatic gearbox when having to navigate stop-start traffic on a daily basis, or needing the greater firepower in a pistol’s fifteen-round magazine compared to a revolver cylinder’s six, to give but two examples.  But those are simply reasons of practicality, while our enduring fondness for being in control — i.e. working  the action of a thing — can be found in the fact that the auto/semi-auto versions haven’t replaced the manual versions completely.

When it comes to rifles, men of the manual-operation persuasion are blessed in that we have several types of operation to choose from:  bolt action, lever action and pump action are all there, and all are still popular, hence our reaction to the pic above.

As Longtime Readers will know, I have an abiding love for all three of the above, and have fired countless rounds through all of them.  Don’t ask me to pick my favorite type, but I have to say, when it comes to pure fun, it takes a lot to beat an open field filled with old tin cans, fruit and suchlike, a pump-action rimfire rifle and a couple thousand rounds of .22 ammo.  I know, it takes a while to reload the tube magazine, but that also allows the barrel to cool, which is no small thing.  So let’s look at a few choices among the latter.

Browning Model 90 / Winchester Model 62 are the originals, and are still available today.  The fact that these old guns (discontinued in 1959) in good condition can fetch well over a grand at gun shows today is testament to their popularity.

But are they that popular?  Recent events seem to prove otherwise.  Of all the gunmakers extant, Henry is the only one which continues to make old-style pump-action rimfire rifles:

It’s a beautiful little rifle — that octagonal barrel! — but I think Henry does us gunnies a real disservice by pricing them so high.  I mean, if Marlin and Ruger can make semi-auto rimfire rifles which retail for less than $150, why do Henry pump rimfires typically cost close to $500 for an action which is much less complex?

I would love to own one of these rifles, most of all because it shoots .22 WMR as well as .22 LR and I can think of few better varmint-whackers than a magnum pump action, but at that nearly-$500 sticker?  Sorry.

Actually, I do know why Henry pump rifles are priced so high:  they have no competition.  Which brings me to my next gripe.

I don’t understand why Taurus discontinued manufacture of their Model 62 knock-offs, either.  (I know, they’ll say “no demand”, but they continue to make other guns which hardly sell at all — the Judge revolver in .45-70 Govt comes to mind, for some reason — so I don’t buy the excuse.)

My Taurus stainless-steel carbine model is beyond beautiful, and as I’ve said before, when I take friends shooting with this little thing, I have to take at least  a brick of .22 ammo with me, so much do people enjoy shooting it.  (Hell, I always carry over a hundred rounds in its case, just to make sure I don’t commit the cardinal sin of .22 ammo shortage at the range.)

Finally, we have a sorta-pump (in that it has a pump action, but doesn’t have an exposed hammer), the sleek, beautiful (and expensive, at around $600!!! new) Remington 572 Fieldmaster:

Look, I’ve fired the 572 dozens of times and sent many a hundred rounds downrange through its 21″ barrel, and if someone gave me one I’d never sell it — but I’d trade  it in a heartbeat for a rifle with an exposed hammer.  Like the Taurus Mod 62 long-barreled model:

It all has to do with that “manual operation” thing — and the more parts you can control, the better. De-cocking is easy with an exposed hammer, impossible with the Remington’s hidden one.

Anyway, let me end by saying that if you don’t have a pump-action rimfire rifle, you’re missing out on a whole lot of fun.  You know what to do.