So back I went back to DFW Gun Range for Round 2 of “getting to know the High Power (again)” (with a small detour along the way).  Some parameters:

Because I’m a Cheap Bastard, I prefer to use as few targets as possible, so what I do is shoot one round into an open area of the target, then use that bullet-hole as the aiming-point for the remaining 7 rounds.  The grouping is what it is.  Here’s what the target looked like afterwards (explanation to follow): 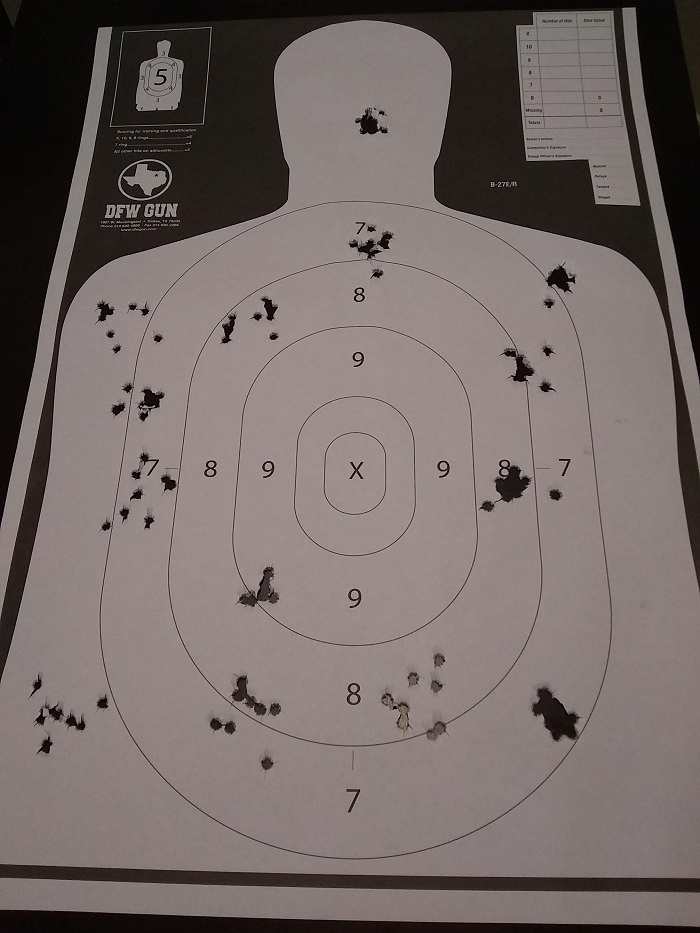 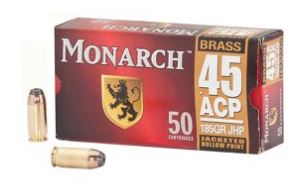 …while the 230gr stuff was regular Winchester White Box. 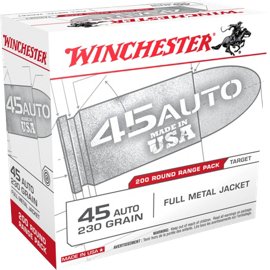 I have to say, I’ve fired a lot of 230gr FMJ ammo in my life — at a rough guess, well over 50,000 rounds in various 1911 pistols, so shooting it holds no surprises for me.  Nevertheless, as I’ve noted recently on these here pages, the recoil from the heavy bullets may be starting to cause a little distress to my old wrists, hence my desire to try a lighter load.  I’ve shot quite a lot — close to a thousand — of the 185gr loads before, but never this brand, and its cheapness gave me low expectations.

Not anymore.  Hell, given the fact that the Monarch ammo is hollow-pointed, I may just use it as my carry load — but before I make that decision, I’ll do a few “real life” comparisons between the cheap Monarch JHP and the premium Hornady self-defense stuff.  (Don’t get excited;  I’m not going to use hippies as targets, tempting as the idea may be.)  I’ll use the old standby (watermelons, water jugs or something like that).  Watch these pages.

On to the High Power, and the cheap Sellier & Bellot 9mm 115gr practice ammo. 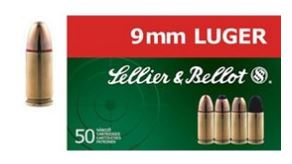 For this area of the target, I’ve simply noted the groupings in order of their arrival on target. 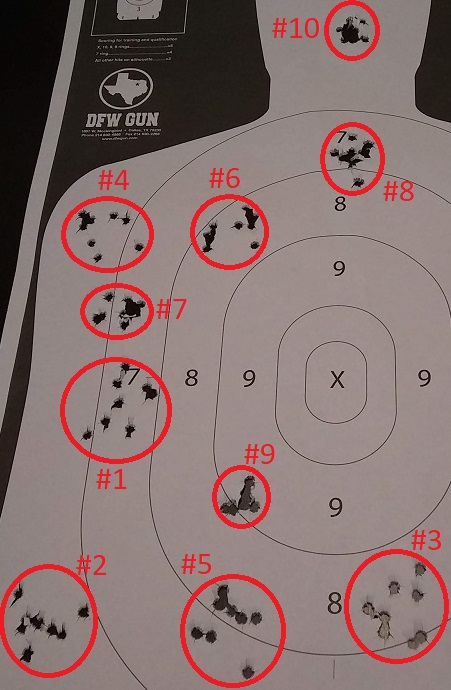 Accuracy started to improve around group #5 (with one flyer), then strings #6-#9 just flew where I wanted them to go.  I was so happy that I broke with my normal tradition (I generally don’t shoot at the head of the target), but my blood was up, and in fact, I think I fired that string at a slightly faster pace than the first nine, not “controlled rapid”, but certainly quicker than “slow deliberate” at any rate.

People sometimes say “the worst day at ____ is better than the best day at the office”, or something like that.  That’s not always true of range sessions;  I’ve had some absolutely shitty days at the range — broken guns, etc. — which quite frankly are worse than a couple of really good days I’ve had at the office.  But at the end of this range session I walked away with the Warm & Fuzzies, a much better day even than the time at the office when I told my boss to fuck off, and wasn’t fired*.

I must be getting old, to make a statement like that.

The only problem arising from this range day was:  I can’t actually decide whether I should use the Browning (with its 12-round mag) as my regular carry piece, or stick with the 1911, now loaded with 8 rounds of 185gr JHPs.  (I always have at least one  spare mag on me, btw, regardless of the gun I’m carrying.)

*Details of that  event some other time.