In my post about 9mm pistols last week, Readers chimed in about the Heckler & Koch P7 thus:

And Mike M: “I have a love/hate relationship with the P7. The squeeze-cock action is great in theory, but it aggravates carpal tunnel issues tremendously. No idea why. And it heats up FAST.”

Not everyone knows about the P7, of course, even among my self-identified gun nut Readers, so here it is: 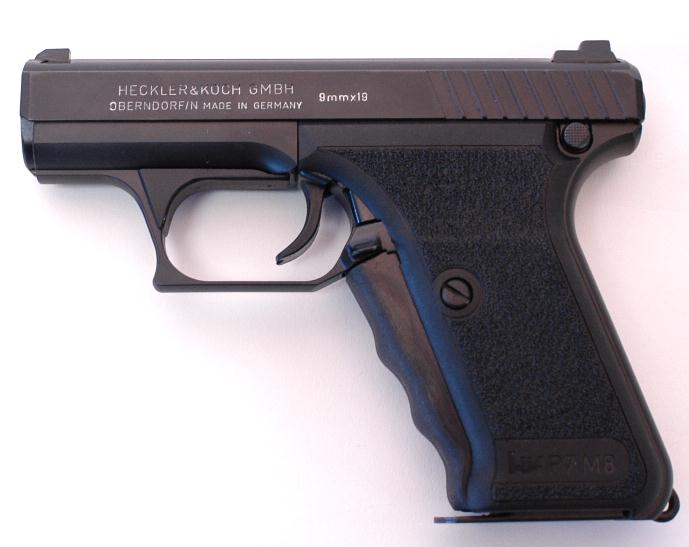 As Reader Mike M. reveals, the P7 is cocked not just by working the slide (which you can do as well) or pulling back a hammer (no exposed hammer, duh), but by squeezing the grip.  In addition to his mention of carpal tunnel syndrome, let me say too that the squeezing action — which is severe, as it should be — had the effect of affecting my aiming of the gun;  so hard did I have to squeeze the wretched thing that after a while my hand got the shakes from muscle strain.  (Bear in mind that this happened after several dozen squeezes — I seldom shoot fewer than 50 rounds when testing a handgun.  YMMV.)

My biggest gripe was that the shorty barrel made accurate shooting impossible at any yardage greater than halitosis distance.  I know, I know… the P7 is purely a short-range self-defense pistol, not a long-distance target shooter;  but I found its strange action to be just that, or else the answer to a question never asked.

Anyway, I later had the opportunity to buy one at a very low price ($150 if I recall correctly), but passed.  There are far better guns for the job than this curiosity.