As manufacturers of consumer products juggle the balls of sales, cost and price, they come up with all sorts of schemes to “fool” customers — the snack bar people like Cadbury or Hershey are experts at this, decreasing the product’s size without raising the price thereof, so that people think that they’re still paying the same for that chocolate bar, and they are, except that they’re in essence paying more per ounce. It’s an old game, and one that I’m fully familiar with (and one that everybody should be fully familiar with, by the way). And as long as it happens with non-essentials like snack bars, I’m indifferent.

Unfortunately, now we seem to be facing this nonsense in our most basic of commodities, .22 ammo. Here’s an example, in an online flyer I received in the old Inbox just yesterday: 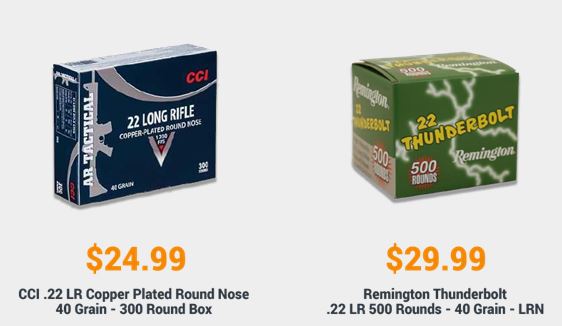 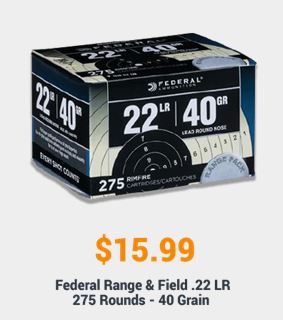 We’re all used to the venerable 500-round “brick” (as seen in the Remington Thunderbolts), of course, which is basically just a combo pack of the normal 50- or 100-round boxes. But we also see CCI’s little sneaker: the 300-round box which keeps it well below the $25 price point and Federal’s 275-round box which keeps the purchase below the $20 price point; but on a per-round basis, boxing the ammo like this can disguise a horribly-expensive price. At least this doesn’t seem to be the case here, because it’s a “Sale”. For those who don’t want to do the arithmetic:
Thunderbolt — 6 cents per round
CCI — 6.25 cents per round
Federal — 5.8 cents per round

Likewise, at the bulk end of the scale, we find products like this: 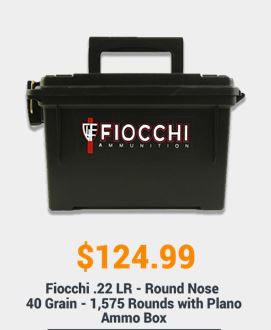 …which equates to 7.9 cents per round. Note that the quantity is 1,575 rounds and not the “three-brick” 1,500 rounds, making brick-by-brick price comparisons impossible without a calculator.

Indeed, all this pack-size differential seems to be designed on just that basis: to confuse the consumer. Certainly, it’s not to overcome pack design constraints or anything like that. So here’s my call to the ammo manufacturers:

Quit fucking us around with this nonsense. Sell your ammo in quantities of 50, 100 and 500, just like you always did, and quit trying to hide the fact that your company’s .22 ammo has become too fucking expensive to support a plinking habit.

I note, incidentally, that Lucky Gunner helps its customers by ranking their .22 ammo on a cost-per-round basis, which makes me smile because you can get to the heart of the matter easily when faced with a choice like this: 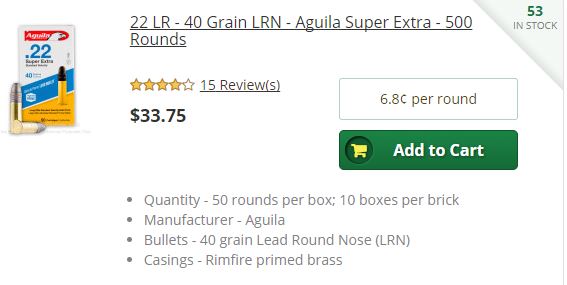 …just in case you didn’t notice that the “lower price” on the Browning applies to 400 rounds and not, like Aguila’s, to 500 rounds.

By the way: I love what Lucky Gunner is doing, but they are not always the cheapest, e.g. on the aforementioned Remington Thunderbolt 500-round brick, where the flyer’s price is $29.99, and LG’s is $38.75. But to be fair, the flyer’s price is a “closeout” deal (like they’re going to ever quit selling Thunderbolts — it’s probably a one-off loss leader ad item, more likely) whereas LG’s price is an everyday price.

Also, caveat emptor: a lot of times, the “great deal” you get on ammo isn’t, once you factor in the S&H costs — which differ widely between suppliers.

I’ll be talking a little more about the .22 LR thing in a later post. And just for the record: unless I’m buying target .22 LR, I refuse to pay more than 8 cents per round for the stuff. Even that price sticks in my craw, but I reluctantly accept the fact of supply and demand, and inflation, albeit with snarling hostility. My go-to CCI Mini-Max 40-grain ammo used to cost $5.99 per hundred — I have ummm several boxes with the price tag on them, dated 2006 — and now it costs $7.99. It’s like the ammo manufacturers don’t want us to shoot anymore.

(Note that in all the above, I’ve used 40-grain bullets as the common factor, and ignored any perceived quality differences in the brands. Frankly, .22 LR ammo is plinking feed, and unless you get a dud rate of more than 0.5%, they’re all pretty much of a muchness. Target/match .22 ammo is another story, and I’m not talking about that here.)