So the BBC published the salaries of their top “talent” a little while ago. Surprise, surprise, men earn more than women for doing the same job. (As Mr. FM puts it, “Most of them are paid to read a teleprompter and are no more journalists than my dogs.”)

There’s a lot to be said about all this, but I’m only going to make a few comments.

BBC is funded largely by annual license fees paid by 95% of the British population — roughly $180 per annum per household — and the fees are collected with incredible ferocity. It’s not unfair to say that they’re collected at gunpoint, because failure to pay can result in massive fines and even imprisonment. Needless to say, therefore, people really bitch about wastage and, inevitably, bloated salaries unless they’re being paid to people of serious worth such as veteran nature documentary maker David Attenborough. Here’s a lesser-known example.

BBC Radio 2 DJ Chris Evans, unsurprisingly, makes more than any of the others. While we Murkins might know Evans as the dorky ginger who tried (and failed) to fill the scuffed suede shoes of Top Gear‘s Jeremy Clarkson, Evans is a brilliant DJ, has had the morning radio gig for many years and has astonishing listenership numbers. (Radio is still very popular Over Here, mostly because the TV, all of it, is such shit.) If we translated Evans’s popularity into a Stateside comparison, he’d make more than Howard Stern did at WNBC in New York or Rush Limbaugh still does. While there’s the usual Wealth Envy moaning from the Labour Commies, not too many people are getting upset about Evans because frankly, he’s worth the money. Of course, there are some male presenters who, equally frankly, are not only overpaid but lucky to be employed at all because by any measure, they’re as shit at their job as the crap they have to present. But that’s not the biggest issue.

Oh no; it’s all about Teh Ladies (of course).

Now I’m not going to get into who are the better presenters (although I can’t see why, say, morning TV show male presenters shouldn’t be paid the same as their female co-presenters — they aren’t; men are paid much more). I haven’t watched enough BBC-TV shows to get an idea, because a.) I have a life and b.) all the morning shows are so banal that they make Good Morning America look like the aforementioned Howard Stern’s TV show, and I’d rather walk the Free Markets’ dogs than watch any of them. I will say that having watched a few, the wimmins are actually more entertaining than the men — unless they’re doing a girls-only show like Loose Women, which makes the American show The View (which is unspeakably bad) look like quality programming by comparison.

My final thought is that managerially speaking, the BBC are a bunch of morons. What they should have done was publish alongside the salaries both the length of tenure on the job — experience counts — and most importantly, the viewership / listenership numbers — it’s all about the eyeballs and earholes, folks. Chris Evans’s 9 million listeners dwarf BBC Breakfast‘s 1.5 million viewers, so that would explain the salary disparity there. (As an aside, I should point out that rival ITV’s Good Morning Britain, hosted jointly by the sexy Susanna Reid and the revolting Piers Morgan only gets 800,000 viewers.) Here’s Susanna: 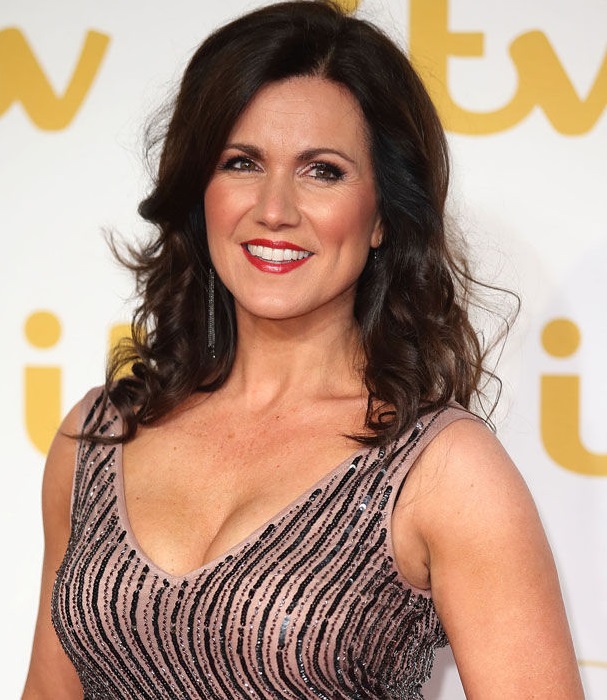 And lastly, the whole BBC salary thing is a study of orange-and-apple comparisons — morning TV shows to, say, football shows — but I have to say, though, that I’m getting a huge amount of pleasure watching the oh-so sanctimoniously-PC BBC wriggle as they try to explain the “gender gap” in their executive wage scales. Couldn’t happen to a nicer bunch of social justice warriors. The BBC also complains that they have to pay these salaries because they’re in competition for talent with the commercial media — except that the competition pays far less, on average, than does the BBC for like jobs.

Addendum: stats on Brit media are incredibly confusing: “peak” vs. “average daily” v.s “weekly” etc. I do understand them, having worked in advertising agencies for years, but I couldn’t be bothered with forensic accuracy. My numbers may be a little off, e.g. dated, but the relative scale of them isn’t, and I’m not a journalist so I have no inclination to spend hours of research on them when I could be cleaning my new Mauser. Priorities: I have them.