One of the several “throw or keep?” decisions I had to make when emptying the house was about my CD collection. As I came late to the Digital Revolution (21st Century version) — and some say I still haven’t joined it — I haven’t started downloading music from Amazon Musik or whatever they call it, simply because I have most of my favorite music on CD already, and with a very few exceptions, I find modern music unappealing.

Unfortunately, this also means that I’ve become sick of all the old music, “old” being defined as 60s-70s music of my rock star (uh huh) youth. I mean, if I hear “Sweet Home Alabama” and anything by Led Zeppelin one more time, I’m going to slip the safety off the 1911. Even longtime favorites like Genesis, Steely Dan and Jethro Tull are beginning to pall, and needless to say, I have every album of artists like the aforementioned as well as the Beatles, Joe Walsh and Wishbone Ash on CD, so the collection of my favorite musical genres is extensive. But I never listen to it anymore because I’m bored with it. I ended up keeping almost all my old CDs, but have yet to unpack any of them, let alone listen to them. The problem is that music has always been a major part of my existence, and I have to listen to something.

So what am I listening to, at the moment? Classical, mostly, because it doesn’t seem as though I can ever get sick of it. Lately I’ve rediscovered several old favorites like Saint-Saëns and Dvorak, and of course there’s always the perennials (Chopin, Bach, Rachmaninoff, Beethoven etc.) that can be relied upon for listening pleasure, as always. It also helps that their music is being interpreted differently by the various conductors and musicians (Lisitsa, Grimaud, Mutter and so on) — and just as I’ve veered away from Classic Rock, I’ve also lost interest in classical artists like Gould, Rubinstein, Horowitz and even Barenboim (the “Old Guys”, as I’ve heard them described). I like the freshness and verve that virtuosos like Valentina Lisitsa and Olga Kern bring to the old favorites like Beethoven’s Pathétique and Rachmaninoff’s Piano No.2, and the effect of that is almost, as I said earlier, a rediscovery of classical music.

In similar vein, I listen to the old standards like the songs of Rogers & Hart, Carmichael and Gershwin — they never grow old — but I have to say, I also enjoy the interpretations given their music by “modern” artists as well: people like the incomparable Harry Connick Jr. and equally-brilliant Norah Jones. Even Willie Nelson and Eric Clapton have started to reinterpret the standards and to my mind, are eclipsing the “old guys” like Fred Astaire and Julie London, who actually introduced me to this genre. (It’s not that the latter are bad — of course they aren’t — but I’ve just heard them so often, it’s starting to get stale. Yes, even Astaire.)

There’s a common thread to the above which I’ve just realized at this moment: it’s not the music I’m sick of, it’s the original versions thereof. Nobody is reinterpreting Classic Rock, other than as cover bands like American English (Beatles) and Zepparella (Zep).

So maybe that’s what Classic Rock needs: for new guys to reinterpret their music (as opposed to just reproducing it), much as Dred Zeppelin did to Led Zeppelin (I love the Dred, by the way). Let’s hear Dream Theater do their version of the White Album (minus the excruciating Revolution No.9, please), let’s see what Norah Jones does to Suite: Judy Blue Eyes and let’s find out what Samantha Fish does with Blowing In The Wind and Harry Connick Jr. with Only One Woman.

But if I can ask for one, and only one favor from all this reinterpretation activity: we do not repeat not need another version of Free Bird. Don’t make me slip that safety off the 1911…

Update: This wouldn’t be a decent post without an example of the “old” music, and a totally gratuitous pic of what I’m talking about. Here’s Samantha Fish: 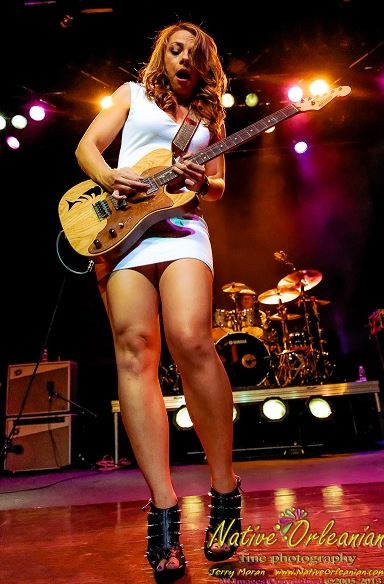 …and here’s Only One Woman.