Reminder: I was reading some article [no link, it was ages ago] wherein a so-called “style and etiquette” expert was making suggestions for the ages at which one should stop doing certain activities (e.g. wearing a bikini), and while I agreed with some of his statements, I found myself in stark disagreement with others. Here’s his #2 of when to stop doing things:

Total bollocks. I don’t know of any actual men (i.e. who are not homosexual hairdressers, pussywhipped husbands, or beta male twerps) who like short hair on a woman. In fact, amongst most men of my acquaintance, short hair is a decided turnoff in that men often associate short hair with feminism, lesbianism or a woman who just doesn’t care about her appearance anymore (and in the last instance, they’re often woefully correct).

If you have beautiful hair, at any age, wear it long, ladies. Leave the cropped hairstyles to the lesbians and grannies. And yes, I know mommies cut their hair into “low-maintenance” styles because of children, which is a lousy excuse and ta-da! might make them look less attractive to their husbands (like anyone cares what those poor bastards think). Of course one can make excuses for women who have unfortunate hair — the thin, wispy Heather Locklear-kind which can’t hold a style or a curl; but apart from that, the longer the better.

No discussion of this topic would be complete without pitchurs, of course, and the most egregious example is the exquisite Anne Hathaway, who cut her wonderful hair short for a movie role (acceptable), then inexplicably kept it short  for well over a year thereafter (ugh). 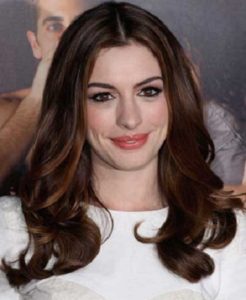 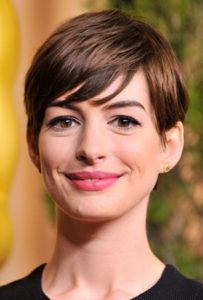 Whoever persuaded her to keep her hair short must really have hated her. You see, she has very exaggerated features (huge eyes, wide mouth and thick lips which admittedly do work in her favor on stage). Longer hair keeps those features in perspective; but unless a woman has petite, regular facial features, the short hairstyle over-emphasizes them and just like Hathaway, will make her look like a caricature of herself.

And finally: bizarre hair colors and Skrillex (“Lisbet-Salander”) hairstyles should be abandoned when one graduates from college and the time for youthful experimentation has passed. Going beyond that, and I start to suspect psychological issues, e.g. Lisbet Salander (I know, she’s a fictional character; fake but accurate). 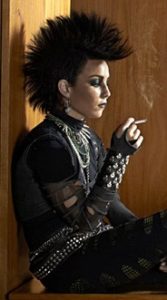 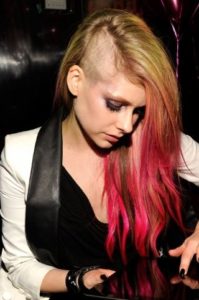 Frankly, the only men who find such looks attractive are men with similar psychological issues. I should also point out that in the pickup artist (PUA) community, such hairstyles are catnip to guys looking for an easy lay.

Of course, every woman should be able to “express herself” and “choose what works for her” and all that feministical jive. I would politely suggest, however, that from the average man’s perspective he’d probably prefer that she doesn’t arrive at the wedding ceremony with a hairstyle like the above. And yeah, I know that women shouldn’t have to shape their appearance according to what attracts men. But that’s the reality of it. There’s a really good reason why Edwardian women kept their hair up in tight chignons during the day, and let it loose at night: the act of unpinning the hair and letting it fall past their shoulders was — and remains — an incredible aphrodisiac to men.

And finally, here’s an example of a woman who has kept her long hair way past the (“sensible”) age of 40: 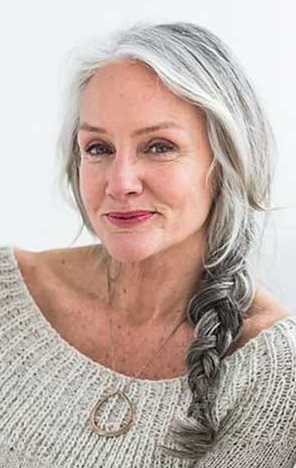