I don’t know if y’all have read this article (found via Insty, thankee Glenn) entitled “The Primal Scream of Identity Politics“, but really, you should.

The deeper question raised is not the instrumental concern of Lilla and others—how liberalism can retool itself in order to win more elections. Rather, it’s the elemental one: How has the question of “identity” come to be emotional and political ground zero for so many in America, and elsewhere in the Western world?

I found Mary Eberstat’s answer to be truly interesting and, unusually for the Weekly Standard, right on the money.

One of the greatest sins perpetrated by statism and its greatest exponent, Marxism, is the dissolution of the family structure. Let’s be perfectly honest, here: for about as long as mankind has walked upright (and probably even before), the basic family unit (father, mother, offspring) and extended unit (grandparents, uncles and aunts etc.) were always held sacred. “Honor thy father and mother” is one of the basic principles of society, regardless of religion, and of course parental care and concern for one’s children is deeply embedded in our genetic code for very good reasons, among them being the one identified by Eberstat: it is the basic building-block of our individual identity; hence family names like Johnson (son of John) or the Icelandic Gudrunsdottir (daughter of Gudrun). It’s also the principle behind the concept of not bringing shame on the family name (even though the latter has been horribly abused by primitive societies like Islamic ones).

But if your mother has been the neighborhood’s Miss Margarine-Legs and each of your siblings shares your mother but has a different father who is anyway notable for his absence, where’s the honor going to appear? Nowhere, if I may answer the rhetorical question.

And of course, Man is a social animal — hence pejorative terms like “sociopath” or “antisocial” for the outliers who aren’t. The need for “belonging” (and its concomitant identity) is elemental, so if the historical primary identity (a member of a family) is gone, the rootless soul will always feel the need to find another — hence the appeal of criminal gangs in inner-city children of single mothers, to give but one example — and for those who were not pulled into gangs, the growth of cults like eco-centrism and even antifa can provide alternatives, poor organizations though they are. (I haven’t seen any facts on this topic, but I’d wager good money that a representative cross-section of antifa members will have come from broken- or single-parent homes.)

Another of Eberstat’s postulations is the widespread occurrence of mental illness among adolescents and Millennials (and we all know about opioid usage in those groups), and once again, it’s not a facile inference to link the lack of a family unit to that phenomenon.

And always remember: dissolution of the family is a Marxist precept, and we are not Marxists, no matter how much liberal politicians and the media think we are or would like us to be.

So, my Readers who have young children: resist with all your might any efforts to denigrate your parental authority — loudly, if you have to — and at all times, remind your children that family matters above all in the grand scheme of things. Tell your kids never to take sides with their friends against their siblings, insist on respect for you and your spouse from them, and always take their side against anyone or any institution: schools, friends and government (except of course in cases of actual criminality).

This, my friends, is the real “resistance”, and we are doomed if we don’t offer any.

Given the history of Communism’s brutality, the headline could be regarded as a truism, but in this case it’s simply an insult. Red Robbo has died, and sadly, far too long after he should have. Leo McKinstry describes it perfectly:

Leyland had inherited great motoring marques such as Austin and Rover but, in large part because of Robinson’s malign influence and that of others in his thrall, quality and innovation rapidly declined.
Increasingly synonymous with shoddiness, the company struggled to compete in the marketplace — not that Robinson cared. As a far Left ideologue, he did not believe in the market. [emphasis added]
But his gospel of permanent workplace revolt exposed a fundamental paradox of Robinson’s career: the man who constantly prattled about the protection of workers’ rights was the greatest destroyer of jobs in the UK motor sector.

But there’s a bright side to this bastard Commie’s activities, as McKinstry notes:

Through his spectacular recklessness, he ultimately repelled the British public and paved the way for the election of Margaret Thatcher — she described him in her memoirs as a ‘notorious agitator’ — with a mandate to tackle the unions. His very name was a vote-winning weapon for the Conservatives in 1979.
It is a rich irony that, in his communist fervour, Red Robbo was inadvertently one of the Tories’ strongest allies as they embarked on ending Labour’s disastrous experiment in trades union domination.

Needless to say, the death of this ghastly pustule has had all the current Commies in the Labour Party lauding his career because that’s what Commies do, the fuckheads.

Wherever Robinson is now, I hope the temperature is set to “Broil”…

I arrived in Scotland last Saturday and spent the afternoon with Mr. Free Market, shopping for sundries (flip-up scope covers, whisky etc.) in preparation for next week’s shooting in Scotland.

Then that night the Fiend Mr. FM introduced me to a drink called “Whisky Mac”, a mixture of Scotch and something called “Stone’s Green Ginger Wine” (see below). 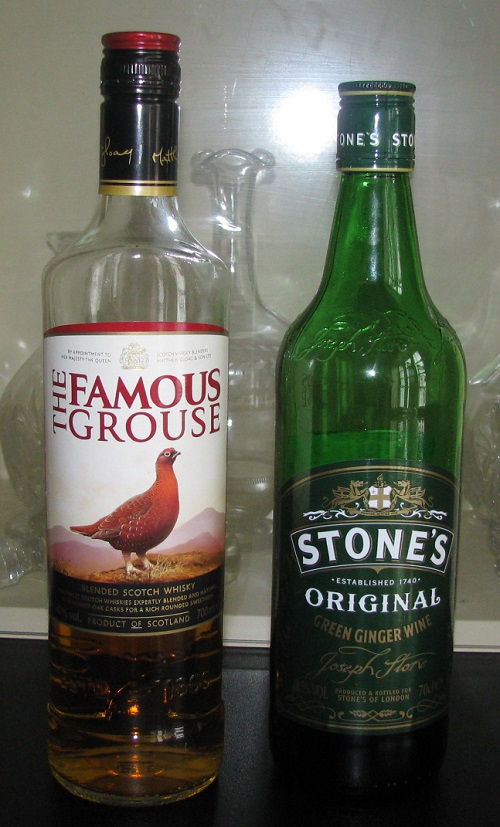 After extensive trial (one might even say over-sampling) of said beverage, I can safely say it is a fine thing but it can cause a massive hangover, as I discovered the following Sunday morning when Mr. FM dragged me out of bed at the crack of noon, threw me into a Land Rover and dragged me off to the range for some rifle shooting. Oy vey.

Let’s just say my marksmanship has been better. 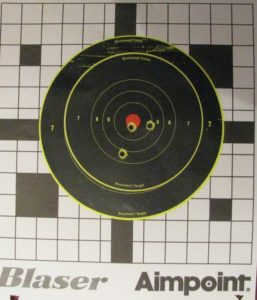 It took me a day or so to recover from my overindulgence, whereupon last night The Englishman came over in his Land Rover, dragged me kicking and screaming away from Free Market Towers and deposited me into a place which serves Wadworth 6X and fish & chips, both of which I partook in great measure. 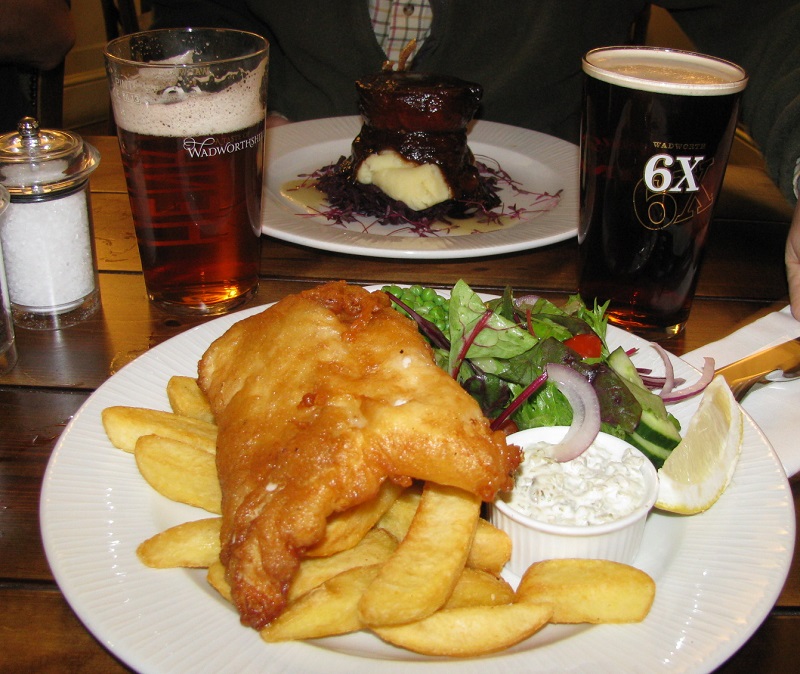 I’m not at my best today. Further blogging will occur when (if) I’ve recovered sufficiently.

Mr. FM returns from London tonight (fresh from evicting widows, beating junior staff and doing Capitalist Things in general), and will no doubt force more of those Whisky Mac things down my unwilling gullet. So tomorrow may see even more-painful blogging.

Yes; I’m having a wonderful time back Over Here, thank you for asking. It hasn’t even rained on me yet, and temperatures are around 45°F in daytime, falling to about 34°F at night. Outside, it looks something like this: 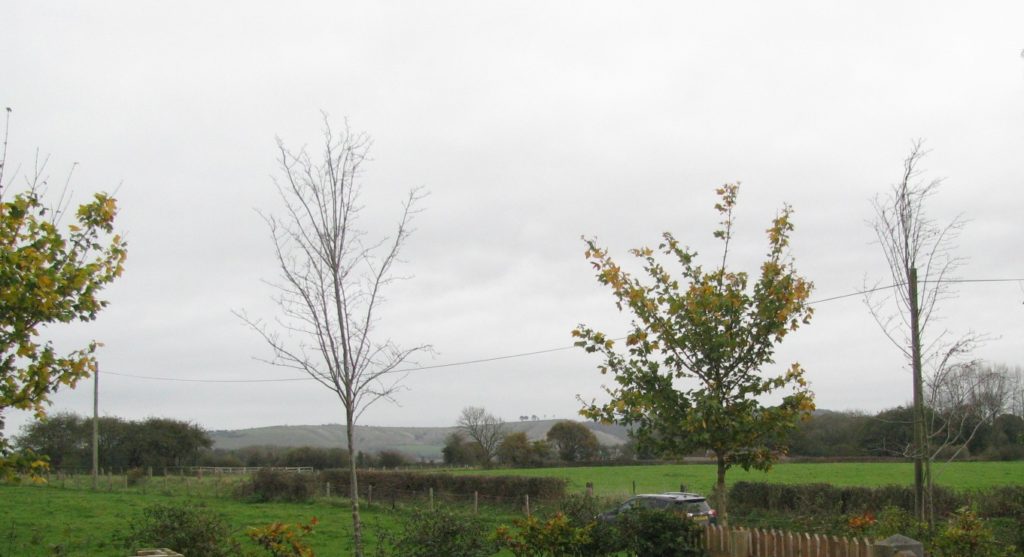 Few leaves on the trees, otherwise still green. Yes, I love it here; why do you ask?

And now, if you’ll excuse me… I’m off to make myself a nice hot cup of tea.